Terrence Jones: Up from the D-League and into the Rockets rotation

Terrence Jones has burst onto the scene as of late for the Rockets, getting big minutes down the stretch. What can we expect from him in the playoffs?

Share All sharing options for: Terrence Jones: Up from the D-League and into the Rockets rotation

After the NBA Draft last summer, most Rockets fans were buzzing about Jeremy Lamb and Royce White's potential to be game changers at the next level. At that point, Terrence Jones was an afterthought; most were disappointed to have allowed Tyler Zeller to slip through their fingers. Now, with just four games left in the season, Jeremy Lamb is with the Oklahoma City Thunder, Royce White is also on his way out of the organization, and Terrence Jones seems poised to wrestle away big minutes at the power forward spot.

His story is one of hard work and determination. Stuck in the D-League with four power forwards ahead of him in the rotation, Jones impressed the coaching staff and eventually made it back to Houston. When he returned, he made sure he would not be back down in Rio Grande Valley. His athleticism and work on the boards has earned him a spot in the Rockets' playoff rotation, and it is a role he will not be giving up any time soon.

How has me made this leap? Let's take a look at him in our latest playoff scouting report. This article is the third in a series of ten where we look at each member of the Rockets' rotation and evaluate them piece by piece. We will be populating this page (bookmark this!) with every article in the series.

Jones has a nice shot and has potential to grow into a "stretch four" at the NBA level, but his outside shot is simply not there right now. He has shot 56% in the paint, but just 24% outside of it. When he is camped at the three point line, he often uses a shot fake to get around defenders and get into the paint where he is much more successful.

Once that shot comes around, Jones is going to be a lot more dangerous on the offensive end. But until then, not falling for his shot fake will go a long way to limiting his effectiveness. 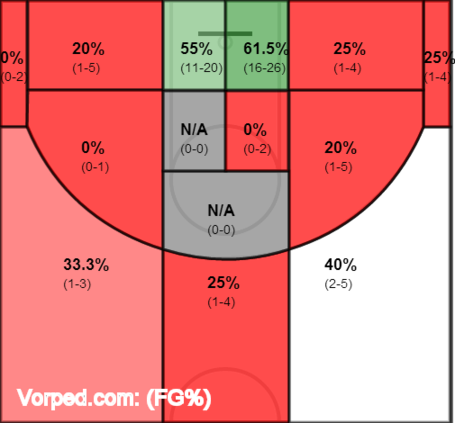 In his short run with the Rockets down the stretch, Jones has shown a propensity to find the ball as it comes off the rim and grab it, securing offensive rebounds left and right. On the year, he has grabbed 12.8% of the Rockets' misses while on the floor, a figure that would rank him 6th among rookies (and top 20 in the NBA) if he had enough minutes.

His length, athleticism, and hard working attitude have all contributed to this skillset, and it has done wonders for the Rockets. His offensive rebounding forces teams to stay back and not leak out in the fast break, and leads to easy layups and dunks for him.

As I mentioned earlier, Jones has a strong shot fake that allows him to get to the rim against some power forwards. When matched up against slower forwards, Jones can often take advantage and score on much easier shots in the paint rather than staying on the perimeter.

His combination of a tight handle and strong quickness for a power forward make him a major mismatch, forcing teams to either stick a quicker defender on him or watch out at the rim with help.

The reason why I noted that his face-up game is "nascent" is that he still is a bit rough around the edges. When he gets in the paint, he sometimes struggles to finish and can get too locked in on the rim. This leads to wild layups, charges, and turnovers. With time, that will likely evolve, but as of now, he is not a major offensive weapon because of these shortcomings.

Defensively, Jones is like many rookies in that he is a mixed bag. In help situations, he is excellent, with his rangy, athletic frame able to quickly get into position to block or contest shots. He also has strong awareness with regards to help, not overhelping and leaving his mark wide open under the basket.

Outside, Jones is also strong, keeping stretch fours on out of the paint and contesting shots well.

In the post, however, Jones could use some work. His long arms allows him to bother opponents' shots, but he often concedes deep post position far too easily. If the Rockets are in a playoff series with a team with two post players, that could present present issues.

A few months ago, it seemed like Terrence Jones was headed for a wasted season and perhaps a postseason trade. Now, he appears to be a big part of the Rockets future. Even though he's a bit rough around the edges, his overall skillset and ability to affect games on both ends of the floor have made him a very valuable member of the Rockets' rotation. In the right matchup, we might see Terrence Jones unleashed this year in the playoffs.