Francisco Garcia joined the Rockets as an afterthought in the Thomas Robinson deal. Now, he's moved into the rotation and his timely shooting could be huge for the Rockets in the playoffs.

Share All sharing options for: Francisco Garcia will try to shoot the Rockets deep into the playoffs

At the trade deadline, the Rockets were nearly universally praised in landing Thomas Robinson for just Patrick Patterson and friends, but most ignored Francisco Garcia's inclusion into the deal. After all, his presence in the trade seemed like nothing more than a salary dump for the Maloofs and Garcia would be sitting behind Carlos Delfino in the wing rotation. A few weeks later, Garcia has emerged as a crucial bench cog for the Rockets and his shooting has helped the Rockets more than once with Delfino and Parsons on the bench with injuries. As the postseason approaches, what can Garcia bring?

The answer to that question will hopefully lie in this scouting report. This article is the second in a series of ten where we look at each member of the Rockets' rotation and evaluate them piece by piece. The first piece can be found here, and we will be populating this page (bookmark this!) with every article in the series.

In short, Garcia is paid millions to shoot and he does it very well. Garcia is not reckless by any stretch of the imagination with his shots, but he is not afraid to put a shot up with a hand in his face. In spot-up situations for the Rockets (short sample size alert), Garcia is shooting over 45% from behind the arc, and he is shooting 42% in shots that I charted as "well-contested."

Part of what makes Garcia such a threat is that though he has a propensity to hit shots with hands in his face, he can also make them from anywhere on the outside, hitting 37.7% or higher in every three point zone on the floor. 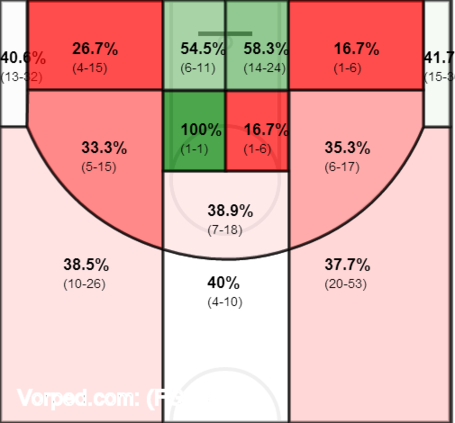 As I said earlier, he's a shooter through and through, and doesn't try to do too much with the ball. In some ways, this is what distinguishes Garcia from Carlos Delfino who gets a bit overzealous at times, and Garcia's turnover rate reflects this. He's top ten among shooting guards with just a 7.8% turnover rate.

In 310 possessions this season, Garcia has used just 13 for isolation plays and 16 for pick-and-rolls, both ranking extremely low in the NBA. In short, he knows what he's good at, and he avoids trying too much. On a team with ambitious young players, a wily old veteran who knows his limits is pretty welcome.

Defensively, I'm going to look at Garcia in a more broad sense than the specific way I looked at Chandler Parsons yesterday, and that's because his defense is not too difficult to describe. Garcia is aging, and though he still has the basketball IQ that got him a multimillion dollar contract a few years ago, his lateral movement is fading.

Garcia struggles in isolation sets, giving up .9 PPP (points per possession) on the season, good for 220th in the NBA, and is even worse in the pick-and-roll, giving up 1.11 PPP, a figure which ranks 229th. He is however, disciplined in help defense, with sharp rotations and quick recoveries, allowing him to limit shooters while also playing good team defense. For somebody who played most of his career in a tough environment in Sacramento, that intelligence on the defensive side is fairly impressive.

Garcia is a weapon who teams will have to respect as he comes off the bench in the playoffs for the Rockets. He has a propensity to get hot from three point distance, and will stabilize a bench offense full of young players. He shoots consistently and judiciously, and tends to play within himself. Defensively, he's not great in one-on-one situations, but is great in a team scheme. In short, he's a great bench player and he fills his role well. As a throw-in in the trade deadline deal, Garcia has done very well for the Rockets and likely has earned himself a few bucks this summer.