NBA leaves Rockets wondering where the line is for tampering

The Rockets were fined today for tampering violations after free agent scouting reports appeared on the team site. A look at just how ridiculous the NBA's decision was.

Share All sharing options for: NBA leaves Rockets wondering where the line is for tampering

As you probably know if you're reading this article, the Rockets were fined today for tampering violations related to articles that appeared on the team website. Specifically, the articles were Jason Friedman's free agency preview, where Friedman ran down the best 60 or 70 free agents that will hit the open market this summer.

Those articles have since been taken down by the Rockets, but by looking at the cached version of the site, I was able to pull up all five, and I will try to give you a better idea of what the NBA deemed tampering.

Excluding the Carlos Delfino blurb in the small forward edition of the preview series, the word "Rockets" is not used in the thousands of words Friedman wrote on future free agents. If this was truly some subliminal message from the front office geared to convince free agents to come to Houston, he at the very least could have written how Dwight Howard "rockets" to the rim or something along those lines.

Instead of mentions of Houston or the Rockets, all you are confronted with are thoughtful, informative scouting reports that give a snapshot of the players set to become free agents. Don't take my word for it, though, The Dream Shake has acquired the profiles scrubbed from Rockets.com. Let's look at a few examples of the blurbs so you start to get the picture of what the NBA thought was tampering. 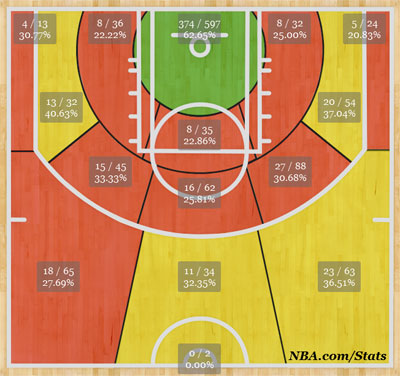 Equal parts electric and confounding - welcome to the Josh Smith story. There is no denying the talent and production the 27-year-old brings to the table, that's for sure. Smith is downright beastly in the open court and an absolute monster finishing around the rim. He's a gifted passer, dynamic shot blocker and is versatile enough to rank as one of the best wing defenders in the game - Smith limited opposing small forwards to a puny 8.9 PER this season according to 82games.com, though the fact power forwards put up a robust mark of 17.3 is at least a trifle concerning. And therein lies the rub with Josh Smith: He is a very, very good player yet one with a tendency to leave you wanting, and expecting, more. Take his oft-discussed shot selection for instance. Smith possesses the ability to bully smaller players, especially on the left block, and blow by bigger defenders ill equipped to handle his first step. Yet for some reason he attempted nearly four long twos per game (admittedly, he reduced that number from the ghastly 6 per game he took the year before) and launched more than 200 three-pointers on the season despite being a career 28 percent shooter from beyond the arc. Transform half of those possessions into more efficient options and Smith becomes a surefire All-Star. Heck, even with the occasionally head-scratching decision-making he pc to expect much to change in that regard. Even if it never does, Smith still brings so much to the table. But should he receive a max contract this summer, some of those tweaks must be made in order to ensure Smith delivers maximum value in return.

Now, Chris Paul, the point man connected to the Rockets in recent days: 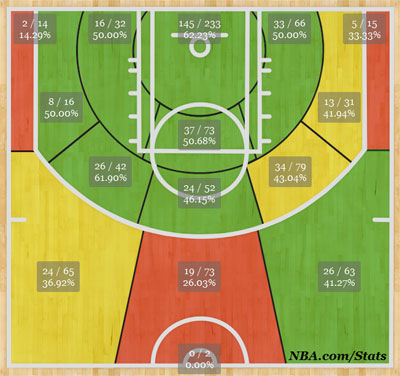 The NBA's gold standard by which all of today's point guards are measured. That's quite a statement given the golden generation of players currently plying their trade at the position, but such is CP3's greatness that, even among a sensationally stacked field, he still stands supreme and on top of the pack. The 28-year-old is an offensive maestro in the half-court, capable of masterfully conducting his team thanks to his sublime combination of basketball brilliance, transcendent skill and a competitive streak that is second to none. Paul is a pick-and-roll savant able to get to his preferred spots on the floor seemingly at will and, once he gets there, is able to inflict maximum damage upon the opposition in myriad ways. At the other end of the court he makes up for his lack of size by being a ball hawk of the highest order. And as if all that were not enough, he is also a one-man crunch time machine. Paul's teams have ranked among the league's best in late-game scoring for years now and this season was no exception: the Clippers ranked second only to Miami in the NBA in offensive efficiency in clutch situations (defined by NBA.com as any time in the last five minutes of a game in which a team is either ahead or behind by five points or fewer). Watch Paul come winning time and the secret to his late-game success rapidly becomes clear: He is a master at drawing fouls, exploiting 2-for-1 opportunities and a host of other little things that so often make the difference between winning or losing the coin flips that double as close games in the NBA. He is one of the crown jewels of this year's free agent class - a transformative player with an opportunity to go down as one of the greatest to have ever played the game.

There you have it. No talk of how the Rockets are sure-fire contenders to land any of these free agents, nothing that crosses the line. And if you're nodding your head at all of this, it gets worse. Rockets.com ran the exact same series last year.

Here are the top ten centers in 2012's free agent class, according to Rockets.com. The point guards, shooting guards, small forwards, and the power forwards. The format is nearly identical, the timing the same, and yet this time the NBA makes a decision to fine the team this go-around.

This is the problem that is so maddening about the NBA's policies. Everything, from fines, suspensions, and now these tampering violations seems so predicated on the time and place in which they occurred. If it seems convenient, precedent goes flying out the window. When Gregg Popovich rested his star players against Miami earlier this season, David Stern took the chance to make an example out of the Spurs on national TV, fining them pledging retribution on national television and fining them $250,000 the next day.

The benching, an act that Popovich had done dozens of times before without being penalized, earned the Spurs a fine not because they broke any rules but rather because Popovich chose to do so in a nationally televised game.

In this case, the Rockets are being punished for poor timing as well. The day before the news broke that the Hawks had written a letter to prospective season ticket holders detailing their plan to sign Dwight Howard and Chris Paul, Friedman's last segment of the series went up, the article on the top centers in free agency.

And so when the NBA was doing their investigation of the Hawks, Dwight Howard's face was sitting on the front page of the Rockets website. Just as Popovich's move had looked bad on a big stage, having the Rockets, perhaps the most-talked about team in free agency this season run a story like that on the same day of another true tampering violation had to have played a role. Otherwise, I'm struggling to see the NBA's rationale for the punishment.

This is a quote from the league memo sent out to all the teams on the tampering penalties (h/t Sam Amick):

Article 35A of the NBA Constitution states that it's a violation of the league's anti-tampering rule for any person affiliated with an NBA team to directly or indirectly (i) entice, induce, or persuade, or attempt to entice, induce or persuade, any player, coach, GM or other person under contract to any other NBA team to enter into negotiations for or relating to that person's services or to negotiate or contract for such services, or (ii) otherwise interfere with the employment relationship between that employee and the other NBA team.

I'm not sure where the articles violated that rule at any point. Friedman presented the facts on a number of upcoming free agents, just like he would write about a strong performance by an opposing player following a Rockets game. Friedman was just doing his job, and to limit him even more than the draconian NBA media rules already do is lunacy.

It was one thing when Rockets.com had to report that the Rockets had drafted Rudy Gay and pretend like he was going to be a Rocket until the Shane Battier trade went through, or when they had to ignore what everyone knew about the Ron Artest deal until it was completed weeks after it was agreed to (Donte Greene's involvement delayed the trade becoming official), but this censorship a whole new level. I don't know the numbers, but I would be willing to bet my bottom dollar that those previews were some of the highest trafficked pages on Rockets.com since the playoffs, and just as the NBA is trying to push readers to their team pages, they cut off a tremendous opportunity for site growth. They truly are cutting off their nose to spite their face.

In the end, the story of what happened with the tampering fines is not so difficult to tease out. After a major public relations miscue, the NBA came down hard and made an example of anyone even remotely coming close to crossing the line. Jason Friedman and the Rockets were just caught in the crossfire. It's not fair, but it's reality in David Stern's NBA.