The Dream Shake sat down and talked to Hall of Famer Rick Barry about free throw shooting, the Ektio shoe, and the NBA Finals.

When Rick Barry starts talking about free throws, you listen. And so when free throws came up in our conversation on Wednesday afternoon, I stopped talking for a bit and listened to the man who shot 90% from the line over his NBA career, and he had some pretty great things to say.

"He's a great candidate to shoot my [underhanded] style," Barry said of Rockets center Omer Asik. "Do you walk around with your hands up above your head? Is it a natural position? He's going to be starting his shot with his hands from a totally natural position with his hands hanging down in a relaxed position. You have two hands to direct the flight of the ball, and the shot itself is a much softer shot. When you miss shooting underhanded, it's not a big miss."

The barrier to making the change? "It's probably more ego than anything else. I don't know why. When my son first made the change, I watched it because I was interested to see how the fans reacted [...] they were more intrigued than anything else. At the end of the game, the opposing team needed to foul and the fans started yelling 'foul 24, foul 24'. They wanted the team to foul my son so they could watch it."

Other times, the barrier could be coaching. "I had Shaq ready to make the change at the Olympics in Atlanta. Unfortunately, Del Harris of the Lakers wouldn't hire me to work with him. Shaq was ready to do it. Jerry West gave the blessing and left it up to the coach, and Del Harris turned me down. He did a disservice to himself, to the team, and to Shaq by turning me down. That would've changed his career. He would've won more championships, he would've been the go-to guy at the end of the game, he would've been virtually unstoppable. It would've been a joke what he would've been able to do had he gotten to be an 80% free throw shooter."

After the spirited discussion on free throw shooting, we turned to the shoe Barry endorses, the Ektio Breakaway. Barry is an endorser and stockholder in the company, and says the Ektio shoe is what his son wore all throughout high school.

On his shoe, Barry says there is "nothing on the marketplace that's comparable to this. There never has been. It's patented technology that makes your foot and your shoe the same, and it really does prevent ankle sprains. It's been proven by independent testing, and there's been incredible responses from the players that are playing with it. 40% think it's given them a better base and that they are shooting it better with the shoe.

"No other shoe does much to prevent ankle sprains. This shoe does that in an exceptional manner. I'm just dumbfounded by the fact that somebody like Adidas or Under Armour doesn't buy this shoe and incorporate it, knowing then that they have a shoe better than anything that anyone else has in the marketplace. It provides protection to players that no other shoe can provide. It's the shoe that I would wear if I was playing, and if I had a deal with Nike or Adidas I would say 'go buy this shoe, this shoe's going to help me prevent an ankle sprain and I want to wear it.'" 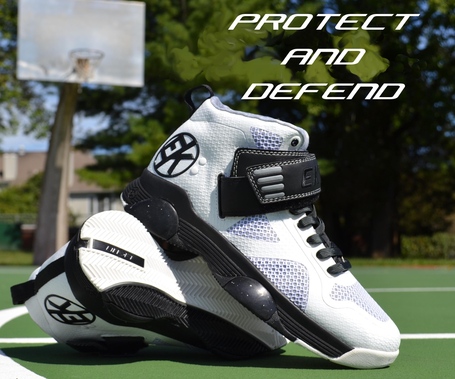 For more on Ektio, check out their website here.

Before I let him go, we talked a little bit about the NBA Finals.

"The Heat are very fortunate that the Spurs had an off game in game two, because this series could very easily be 3-0. I thought the Spurs were the team to beat going into the playoffs and I still feel that way, but the Heat have shown a great ability to respond when necessary and they need to do that tomorrow night. They talked about game three being a huge game, and they weren't able to win that one. The most critical game of the season will be tomorrow night, and if the Heat can't win that one, the Spurs will be in total control of the series."

On Tony Parker's injury and expectations for game four, he said "if Tony can't play at the same speed, he's going to be nowhere near the same player and that will really affect him. However, he wasn't the same player in game three, and it didn't seem to have an impact on the performance as role players like Danny Green and Gary Neal stepped up big time."

"I would assume that Gregg Popovich would make no changes initially because he had such great success in game three, but it will be fun to see what Spoelstra does to change it up for game four."

And just as my time was expiring, I couldn't resist. "Where does Dwight end up?" He had the best answer anyone could give, "I have no idea."

Me neither, Rick. Me neither.