Using graphs and numbers to group your NBA wings. Who were the best shot creators? Who were the complementary shooters? Who was straight up terrible (Austin Rivers)?

Share All sharing options for: Examining efficiency and assists to see how wings score in the NBA

Every time I find a new tool, I always feel the need to show it off and mess with it. This time, I found a data visualization tool online called tableau public, and decided to geek out on some NBA stats and visualize some ideas that have been swirling around in my head.

We have long learned that positional lines have blurred in this new era of bigger, stronger, more agile athletes with versatile skills. Traditional definitions of positional roles and skills seem to matter little when you have multi-positional monsters like Kevin Durant, Lebron James, and Russell Westbrook on the court. At the same time, the emergence of these highly versatile players also creates niches for non-traditional specialists to thrive alongside them. There is a need to reclassify positions to better describe players and figure out how they fit one another.

I don't really have the statistical chops to do something that large, but what I can do is sub-divide a certain position or positions via certain metrics, and parse out subclasses. In this case, I decided how wing players get their shots and how well they shoot are the most important differentiating factors for them on offense.

So I plotted all the SG/SF listed on Hoopdata that played at least 20 games and 15 minutes per game in the 2012-13 season onto a %assisted versus true shooting % graph. Each plot point is also differentiated by color and size, representing their 3 point shooting percentage and usage rate respectively. The result is something that looks like this. 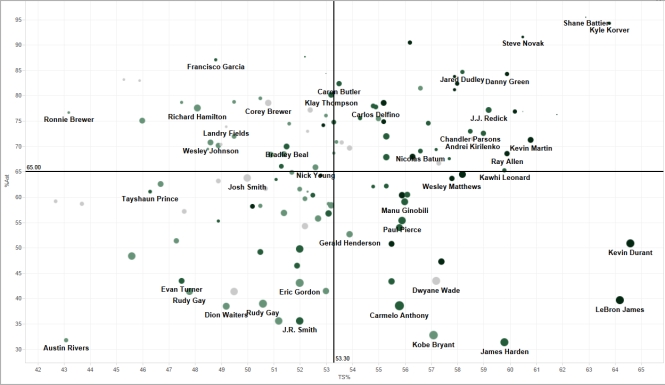 The questions behind the idea are very simple: Who creates and makes their own shots? Using the average of all players as a baseline, the wing position separates out into 4 general groups: efficient shot creators, efficient off ball shooters, weak offensive threats, and detrimental shot creators.

These were the wing players that were relied upon to create their own shot, and performed well under those circumstances. Represented by the league's best scorers in Kevin Durant, Kobe Bryant, Lebron James, and of course, the Rockets' own James Harden. Most of these players excelled in 1 on 1 situations. They had a larger portion of their shots unassisted because they did not need others to create openings.

Naturally they were also the highest usage players because of their scoring ability. These players are commodities because they are the purest offensive threat on the perimeter; they don't need to work very hard to get a good shot off, and they make shots at a high rate.

There are a few oddities in this sector. Courtney Lee, Wayne Ellington as a Cavalier, Chris Copeland, and Wes Matthews were merely present due to the high average of %AST among wing players. They really belonged to the next group of efficient off ball players. If the guideline were more strict at lower than 50 percent assisted, then only 7 players wing player would qualify.

Call them role players, shooters, complimentary piece; whatever they are, they are an integral part of a successful team. The majority of these players are shooters that feed off the main shot creators and play makers. The wing positions traditionally relied on others to give them shots, as 5% more of their makes were assisted this past season, and most of these players had their percentage of assisted makes north of 70%. Our resident small forward tandem of Carlos Delfino and Chandler Parsons both fall into this category, and Franscisco Garcia as a Rocket fell 2 games short of my filter of 20 games minimum, but he also would have been in this group.

Most of these players have average usage, and almost all of them are 3 point shooters. Excluding power forwards like Kenneth Faried and Thaddeus Young (classified as SF by Hoopdata), only 6 out of 36 players shot worse than 35% from the 3 point line.

You can further separate out the specialists in the group. There were 4 players that had 90% of their makes assisted, and all 4 of them shot over 40% from the 3 point range. Among them, Shane Battier, Kyle Korver, and Steve Novak took over 65% of their shots from the 3 point line and beyond. Franscisco Garcia as a Rocket also would qualify as 90% of his makes were assisted and 70% of his attempts were 3 point shots. These were 3 point specialists that heavily depended on catch and shoot from deep. You might even say they were limited players as each of them had far below average usage rates despite sensational shooting prowess from deep.

On the opposite side of the spectrum, Shawn Marion and Andrei Kirilenko stuck out as a couple of the few players in this sector without a great 3 point shot, yet able to get most of their offense off the ball and remain efficient. Kirilenko and Mickael Gelabale might have taken advantage of playing with a strong playmaker in Ricky Rubio to get them easy shots and maintain their efficient shooting.

I had a problem naming this group because it was a mishmash of different player types. These were players who, for one reason or another, had an inefficient shooting season despite having most of their shots created for them. Most of these players shot below average from the 3 point range, and since the majority of their makes were assisted field goals, they probably were weak ball handlers. Shooting and ball handling are critical parts of offense for perimeter players, so a player lacking in both is likely a weak offense threat. Players like Ronnie Brewer, Luke Walton, Deshawn Stevenson, and Al Farouq Aminu best represented this group.

Inexperience in the NBA may also contribute to some players' poor shooting season. Most rookies have to transition from a primary scoring role into a limited complementary role, and, a lot of times, rookies struggle to play efficiently without the ball in their hands and consistent playing time. Rookies like Jae Crowder, Bradley Beal, and Terrence Ross will probably transition into different niches as their roles on offense increase in their respective teams.

Team philosophy also plays a role. The Bulls, a team that was 5th in mid-range attempts and 29th in three point shots, were interesting in this context. 3 of their perimeter players, Hamilton, Deng, and Belinelli, fell into this zone. On the one hand it speaks to how disciplined the Bulls were, as all 3 of these players took an above average percentage of assisted shots, but on the other hand, it also speaks to the quality of those opportunities, since all 3 players had below average shooting seasons. Hamilton was the only player to have a usage rate over 25% and have over 70% of his makes assisted. He was one of the best at working off the ball to get open shots, but few 3s and low free throw rate meant he could not buoy his efficiency when he shot poorly.

These were the worst offensive wing players in the league, headlined by Austin Rivers, Evan Turner, Michael Beasley and Rudy Gay (on any team). These players didn't just shoot poorly, they shot poorly outside of the flow of the offense. They were high usage inefficient players. Many of the players in this sector had reputation of low basketball IQ, and in the context of this graph, it was mostly demonstrated through poor shot selection.

Some of these players were probably miscast as shot creators, others simply lacked the ability to play off the ball. One way or another, these players hurt their team more than helped this past season. Rookies like Austin Rivers, Michael Kidd-Gilchrist, and Dion Waiters had the excuse of not being accustomed to facing NBA defenses, but for guys like Michael Beasley, Rudy Gay, and Monta Ellis, poor shot selection is part of their game, an ominous sign for their future success as offensive players. They scored by eating up a large portion of the team's possessions and only generated meager returns.

A surprise name in this sector was Tayshaun Prince, who has had the reputation of being a great complimentary player. Tayshaun Prince was actually more of a shot creating wing over the course of his career, as he only has had 2 seasons with more than 65% of his makes assisted. Unfortunately, he was a much more efficient player early in his career and has become less efficient as he tries to create more offense.

Change of environment had unexpected effects

JJ Redick and Tayshaun Prince both changed teams during the season, had decrease shot creating responsibilities, and proceeded to shoot much worse in their new environment. Wayne Ellington had an increased shot creating role when he changed teams, and he shot much better. In the case of Ellington and Prince, one moved out of a low pace team, and the other moved into one, which may explain the difference, as higher pace teams usually have better offensive "flow." JJ Redick was really odd because he shot extremely poorly from 3 as a Buck, which pulled down his TS% significantly.

3 point shooting a must for the wing positions

Toggle down 3pt attempts per 36, and you'll find most of the players disappear from the graph. Only 15 wing players averaged less than 2 3 point attempts per 36 minutes. 3 point percentage is extremely important to wing player success offensively, very few had better than average TS% without being a good 3 point shooter.

The real reason for this "study"

The Rockets are pursuing big names on the market, and in the process, they will have to sacrifice some solid pieces from the wing position. No matter what the context of the team is or will be, efficient role players in the wings are extremely important to a successful team. I made this graph to look at team construction of other teams and see if I can find unexpected options to pop up for replacing Delfino and Garcia.

Not surprisingly, teams with mostly efficient wing players were more successful. It helps to have Kevin Durant, but it certainly added value to have Thabo Sefolosha, and Kevin Martin feed off him.The Rockets constructed a strong base with James Harden and Chandler Parsons and supplemented them with Carlos Delfino and Francisco Garcia, but who can replace them if they are gone? According to the graph, Korver, Dunleavy, Copeland, Wright and Webster are our best bet for this free agent class.

The graph is not perfect by any means, and as many of you have already realized, the baselines I used were not meant for hard and fast separations. A lot of players are in the gray area between sectors. Wayne Ellington, for example, traversed 2 zones with 2 different teams, but really belonged to neither. This was meant to classify players as what they were in the 2012-2013 season, a shallow look into how wing players' offense were generated. Feel free to give me any feedback and thoughts on the assessment or the graph.

I've embedded a version of the interactive graph here. You can highlight players to see what group they belong to and see if you agree with the assessment. You can also click highlight to select all the wing players from the same team to look at team construction. I also included 3 filters of 3pt attempts per 36, usage rate, and points per 36 so you can unclutter the graph a little more. It doesn't really play nice with ad/script/pop up blockers, so make sure you disable them if you want to see the graph.

The embedded version does not show the size distinctions very well, so you can also look at a full page version here.