James Harden uses the gather provision to perfection for the Rockets

A little wrinkle in the rulebook allows James Harden to take three steps legally and get into the paint at will. A film study of how Harden does it.

Share All sharing options for: James Harden uses the gather provision to perfection for the Rockets

We see it every game. James Harden receives the ball above the three point line, takes a dribble towards the hoop, and suddenly takes off from right inside the arc, attacking, and contorting his way to the rim for a layup attempt. How does he pull this off though? He's so far away from the hoop, there's no way he can get to the rim legally with only two steps. The answer: He takes three. You're probably thinking "isn't that traveling?" Well, yes and no. The NBA only allows 2 steps on drives unless a player uses the "gather provision" as seen below:

As seen in the rule above, a player's 2 steps begin after "gaining control of the ball". To help make that clearer, a player is allowed a step to gather and collect the ball after a dribble and then take off with two more steps after gaining full control of the ball. Nobody in the league is better using this rule to their advantage than James Harden is. His mastery of using this rule is a large part of the reason he is so lethal when he attacks the rim for layups and fouls. Here are some examples of James Harden drives where he clearly uses the gather provision to attack the lane.

As we see here, the play begins with James Harden taking a left handed forward dribble that will get him inside the arc so he can attack Ekpe Udoh while Brandon Jennings trails to his right. 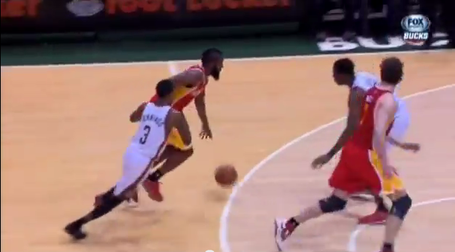 After the dribble he plants his left foot right on the three point line while Brandon Jennings still trails and Ekpe Udoh gets ready to attempt to make a defensive play on Harden. 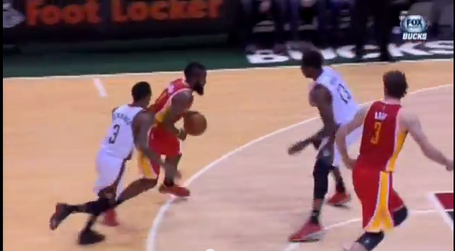 This is where the "gather" happens. After planting his left foot after the dribble he quickly takes a big forward right step toward the middle of the free throw line while gathering the ball with both hands. He has already beaten both Udoh and Jennings off the dribble. Jennings is in no position to make a play on Harden from behind and Udoh as seen below whiffed badly on the attempted steal. He only takes off from here. 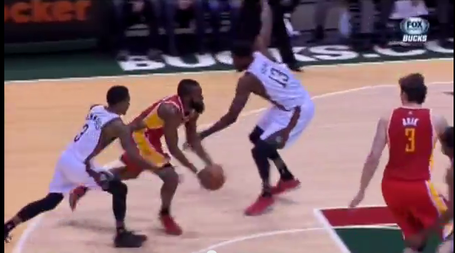 James Harden's second step comes when he plants his left foot on the top right corner of the paint. This is considered the first step of his drive to the basket where he attacks the open area of the paint as three Bucks players watch. 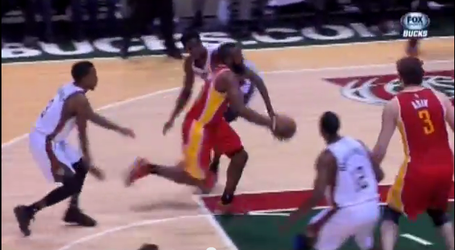 Finally, Harden takes one more big right step to the middle of the paint right above the restricted area. This marks his third step after stopping his dribble and he's prepared to take off. By the way, look at Jennings and Udoh and laugh as they have been utterly useless on this play allowing James Harden to beat them both and create this opportunity. 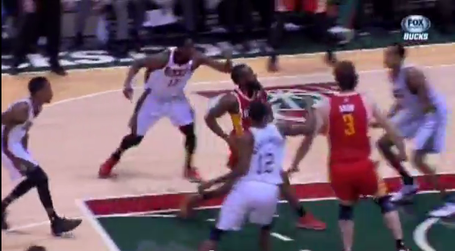 Finally, James Harden takes off his right foot (the planted one in the picture above) and attacks the rim for a made layup. Four Milwaukee Bucks watch in awe as Harden has quickly gone from the arc to the paint and the other who appears to be Monta decides to contest Harden's layup to no avail. 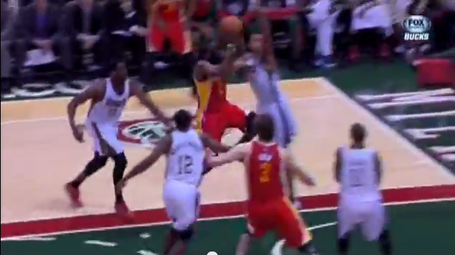 To review, not only has Monta Ellis decided to be the only Buck to play defense for once, but Harden has also used the gather provision beautifully. In 3 legal steps he went from right inside the arc to the middle of the paint blowing by countless defenders along the way for a layup.

This came in the final moments of the comeback against the Timberwolves. First before we look at the drive itself, Omer Asik set a bone crushing screen on Ridnour. Let's appreciate it for a moment. 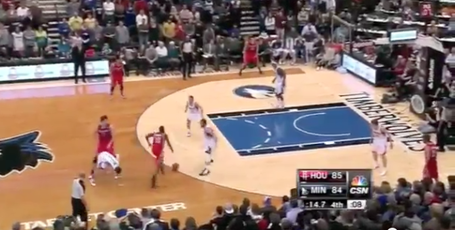 Receiving the ball with his left hand from his crossover dribble, Harden plants his right foot and begins to prepare for the rest of his drive. The two Minnesota defenders play purely to stop Harden's penetration, moving towards the middle even more. 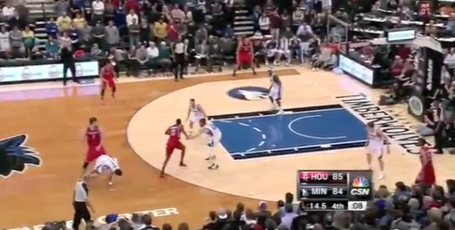 Harden in the picture above has his right foot planted right above the paint counting as his first step and gather giving him the position to split the defenders. Then he takes his second step with his left very quickly, putting it right above the free throw line as we see in the photo. The Timberwolves have allowed Harden to split their double team, now he can attack the rim at will. 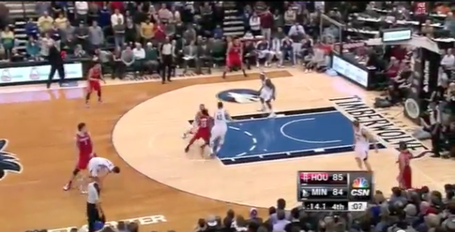 James Harden takes his third step here where he lunges his right foot into the middle of the paint, successfully beating both JJ Barea and Kevin Love. Now there's only air between Harden and the rim. Nothing the Timberwolves can do will stop him from icing this game.

Also notice Asik's pick is still taking its toll on Ridnour. There's nothing like a bone crushing screen. 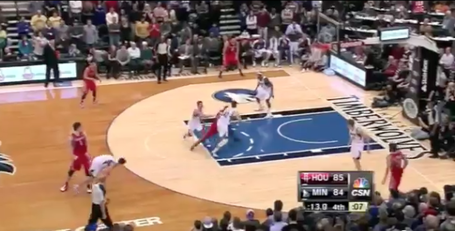 Here's icing on the cake, not only did James Harden make the layup after taking off his right foot, he also cemented another victory in the Rocket's win column. 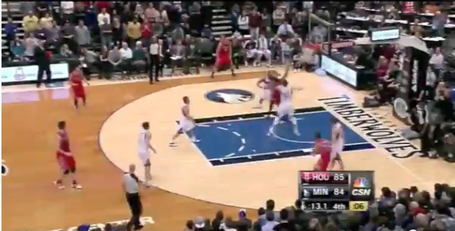 The use of the gather provision in this play allowed Harden to split JJ Barea and Kevin Love for an easy game icing layup. His gather step gave Harden the ability to create optimal position for his next two steps splitting Love and Barea for the easy layup.

Daequan Cook sighting in the left corner! I didn't know he actually touched the court while he was a Rocket, but obviously I'm wrong.

James Harden begins the drive at the 10:25 mark (pay attention to this) after creating separation from JR Smith via the Greg Smith screen. He takes a left handed dribble and step towards the middle of the court. Jason Kidd and Carmelo Anthony attempt to cut off the paint like the Timberwolves did in the play above, but we know how that turned out. 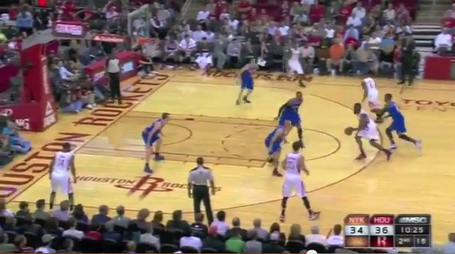 Gathering his dribble with both hands, he takes a right step toward a retreating Carmelo Anthony as JR Smith tries to recover and Jason Kidd slides over toward the paint even more. This is his first of three steps on this drive. 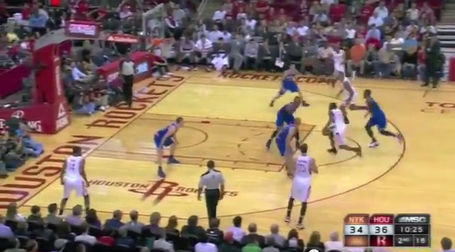 His second step comes with a left step just inside the paint (it's blocked by Kidd's leg, but it's there) attacking Carmelo Anthony leaving Jason Kidd and JR Smith in the dust. He has already successfully went from going right and then to left on this drive with two steps; now all that's left is one more change of direction. 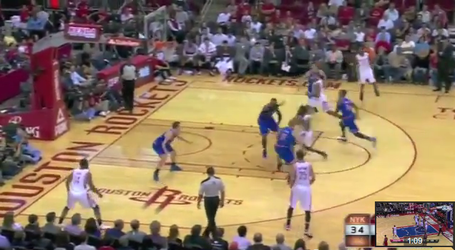 Finally his last change of direction is to the right via a huge right step past Carmelo Anthony's body, allowing him to vault towards the rim. That makes the step count three, going from right to left to right all in one drive. 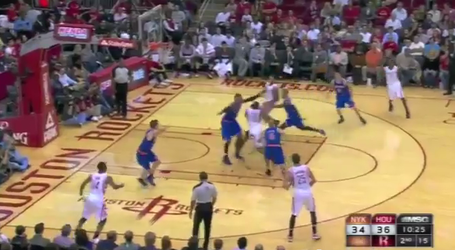 The drive ends at the 10:24 mark, meaning that this drive from the arc to the paint took James Harden all of one second. That's crazy fast. By the time Harden vaults off his right foot after putting Carmelo Anthony in the Euro-step mixer it's already too late and the Knicks have to resort to fouling The Bearded One. Steve Novak is still in his awkward defensive stance, but has moved away from where the play is to stick onto Cook for some reason. 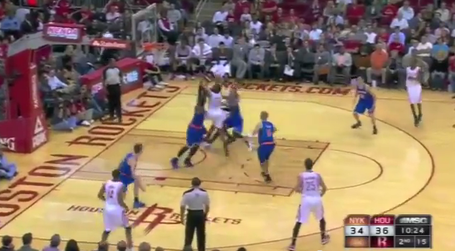 Harden's use of the gather provision allows him to change directions multiple times (3 in this instance) to put defenders on their heels and then propel himself towards the rim for dunks, layups, and fouls. He successfully did this to Carmelo Anthony to draw an easy two points from the line.

Plays like these are what makes Harden as great as he is. He is always a threat no matter where he is on the court and these plays prove it. Harden can go from the three point line to the paint in 3 legal steps in the blink of an eye. He's one of the few NBA players that can pull off this feat, and I'm sure glad he's doing it for the Rockets and not anyone else.