When free agency kicks off at 12PM EST on July 1st, the Rockets will be knocking on Dwight Howard's door. What will their pitch look like?

Share All sharing options for: NBA Free Agency 2013: Rockets to have first crack at Dwight Howard

According to Chris Broussard and David Baumann, the Rockets will be the first team to meet with Dwight Howard when free agency starts on July 1st. Broussard noted in an interview with ESPN that the Rockets will meet with Howard on June 30th at 9PM Pacific time, with the Mavericks to meet with him the next day and the Lakers getting the final pitch.

Baumann and Marc Stein had some interesting tidbits on the Rockets' plan for the pitch:

Rockets planning strong contingent to recruit Dwight that is said to include Hakeem, James Harden along w/Kevin McHale & team officials

Source: #Rockets' McHale, Parsons, Harden & Olajuwon will be 1st team to meet with Dwight Howard in LA at FA bell.

Let's run through that cast of characters meeting with Howard on Sunday night. You have Kevin McHale, perhaps the most skilled back to basket players in NBA history, universally admired by NBA big man, the man who would be your next coach. Then you have Chandler Parsons, the most attractive man in the NBA, always ready if you need some hair gel or a Natty Ice (he's also a pretty damn good player). Next, is James Harden, the man who appears ready to take over the throne as the NBA's top shooting guard, the man that would help carry you to an NBA Finals or two. If you join the Rockets, I'm sure he'd be happy to go to the many strip clubs Houston has to offer with you.

Finally, you have the greatest center of all-time, the one and only Hakeem Olajuwon. When Hakeem speaks, you listen. Honestly, if Dwight says no to Hakeem, he's even crazier than we thought. 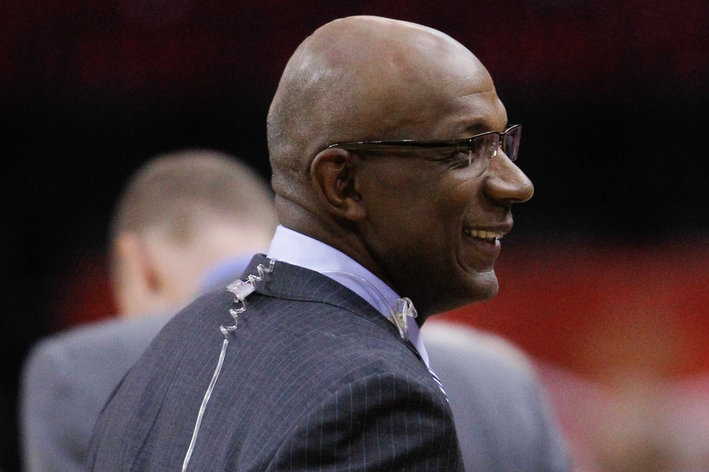 Rockets broadcaster and basketball legend will also be in attendance when Daryl Morey makes his pitch to Howard.

At the end of the day, however, the Rockets have dialed up these crazy recruiting pitches before, and they've been burned by free agents over and over. Let's hope this isn't one of Morey's big swings and misses once again, because this one would be an all-time letdown.

Get ready for a crazy ride, because free agency starts in about 33 hours. You'll hear a lot between now and then.