Can Kevin McHale resurrect the Twin Towers in Houston?

Time may be ticking on McHale more than anyone else.

Share All sharing options for: Can Kevin McHale resurrect the Twin Towers in Houston?

Much was made about the consortium that made the pitch to Dwight Howard on the night of June 30th, but little has been said about what everyone actually talked about. Between Clyde, Yao, and Dikembe alone, there were a lot of voices at that meeting, a lot of experience and a lot of success. But I wonder at one point if a smirking Hakeem Olajuwon leaned across the table in between sips of what I'm sure was very fine Champagne and asked Dwight Howard how Mitch Kupchak was doing.

Let's not forget that long before Kupchak was busy chasing one of the most prized free agents since LeBron James out of town, Kupchak was a three-time NBA champion for the Los Angeles Lakers alongside Magic Johnson and Kareem Abdul-Jabaar.

Let's also not forget that on the day that Mitch Kupchak's career ended Olajuwon busted the side of his face with a left hook earning both players an ejection from game five of the 86' Western Conference Finals:

I also wonder if any stories of the Rocket's ill-fated Twin Towers era were exchanged that night. And I wonder just how aware everyone around the table was that if Howard did indeed come to Houston, the Rockets have the best chance to recapture some of the glory that was rightfully theirs back in the days when Kevin Sampson and Olajuwon and Lewis Lloyd and Mitchell Wiggins and John Lucas were on the verge of demolishing the foundations NBA and erecting towering skyscrapers atop the ruins.

That, of course, never happened. And that's when it sinks in just how monumental and legacy-changing it was for the Houston Rockets to land Dwight Howard. It's not every day as a fan that you're rewarded all the fucks you've given about a team with something as big as this. At last, everyone can collectively exhale and let go of all the feelings of longing that we have felt towards the acquisition of a marquee free agent. But there are still a few things to consider.

While most of the pressure is now on Howard to finally fulfill his destiny and deliver on his promise of basketball greatness, you could argue that the man that has the most influence over the future of the Rockets is actually someone else this season.

That's when we get to Kevin McHale.

Now, long-after he was a core member of the '86 Boston Celtics that would go on to defeat Olajuwon and the Rockets in six games of the ‘86 Finals (pictured above) , the onus is on McHale to realize his dream of playing with two 7-foot guys that can flat-out block shots and rebound and score in the paint.

McHale's basketball roots are deeply entwined with the soil found right beneath the basket. He formed his core fundamentals of basketball in the days when towering masses of flesh pounded against one another in the paint and playoff games sometimes resembled the brutality of tribal clans clashing over land. To McHale, the idea that you win games by eliminating as much space in between you and the basket isn't exactly rocket science. And by that logic a 6' 6' guard starting 19 feet from the basket has a much harder time scoring than a 7' foot forward starting with one foot in the paint.

You win the game from the inside-out, not the outside-in. Every possession should be aimed at getting a high percentage shot close to the basket and you kick out for a jump shot only after you have explored beating into the paint. It always comes back to the middle. Always.

McHale has long yearned for the ideal team that could execute that game plan. To the extent that McHale can accomplish this will have more influence over the future of this franchise than anything Howard, or James Harden or Jeremy Lin can do.

But is this philosophy still a winning one? Assuming Asik stays around, McHale's first task will have to be finding harmony between the Turkish center and Howard. How, exactly, does McHale plan to make the most of his two centers? History is actually rather unkind to Twin Tower duos in the past.

Wilt Chamberlain and Nate Thurmond only produced one trip to the finals with the San Francisco Warriors in 1964; Walt Bellamy and Willis Reed never produced anything better than a few playoff wins for the Knicks; Same for Bill Cartwright and Patrick Ewing a few decades later; Ralph Sampson and Akeem Olajuwon peaked as a duo in 1986, it'd be almost ten years later before Hakeem's first championship. Only the Celtics' McHale-Robert Parish pairing generated multiple rings in those old days.

More recently you have the San Anotio Spurs' Tim Duncan and David Robinson (two NBA titles) and the Lakers' Andrew Bynum and Pau Gasol (one title). Yet even if you delve deeper into those rosters you find that another Hall of Famer (or at least an All-Star) was always present; Larry Bird for McHale and Parish, Kobe for Bynum and Gasol, John Starks for Cartwright and Ewing.

McHale may be obsessed with pounding the ball into the basket every time but it's not a guarantee that having a world class center and a complimentary towering forward will lead to success. It's difficult, true. But it can be done. You need firepower from your guards (enter James Harden/Parsons) and a savvy pointman that can distribute the ball efficiently between the two big men (Lin?). But most importantly you need the basketball acumen to place your chess pieces in the best position to fuck shit up. Finding proper spacing for 520 pounds of rolling human mass in a 15.24 meter box is not as simple as you think. Now the task comes to implementing a proper strategy that choreographs the movements of both players while making the most of their skills and at the same time do so without getting in each other's way. That doesn't sound very easy. And honestly, does the term "calculating tactician" come to mind when you think of McHale? 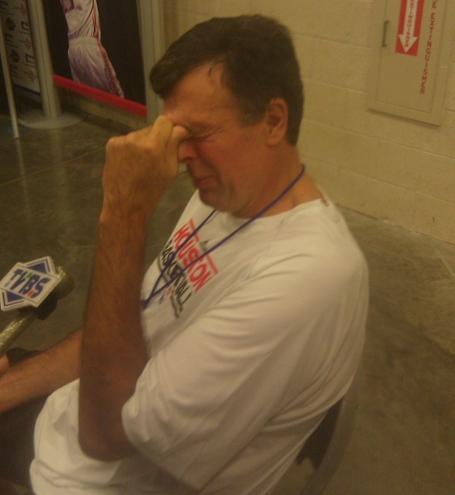 At the moment McHale's reputation as a head coach could easily be brought into question. As it stands, McHale is coming into the 2013-2014 season with a career record of 118-124. In four seasons roaming the sidelines (well, three and a half considering he took over the Minnesota Timberwolves after they ousted Flip Saunders mid-season) McHale has never coached a team that finished better than third in its division standings, and has only one 1st round play-off exit to bolster what is otherwise a perfectly tolerable regular season resume of competence. Yet while his track record leaves a little to be desired, the raw numbers betray the flashes of brilliance he orchestrated with the Rockets last season.

In two years with the Rockets he's done well considering the lockout denied him the advent of a full training camp his first year only to have nearly the entire roster vanish the following season. With the roster in a state of constant flux, McHale was smart enough to realize that you have to change your approach depending on the skills that your roster can provide. The Rockets did nearly break records from the 3-point line.

You don't take a guy like Donatas Motiejunas and expect him to box out Roy Hibbert for 30 minutes. You alter your strategy to fit what your guys do best. So far McHale has done his best to steady his rotations despite constant personnel changes and has done a decent job of keeping some of the fundamentals of Rick Adelman's Princeton system when he took over two years ago. Houston runs. Houston shoots. Houston scores.

But where will McHale take us now? He's entering the final year of his contract and we haven't heard much in the way contract negotiations. While it may be easy to defend such a decision, extending McHale now would be a mistake.

McHale was, after all, thought to be only a stop-gap, a steady hand to hold the roster together and keep things interesting during the era of "competitive rebuilding." A contract year means the same to a coach as it does to a player. At 55 years old and after four years of producing a promising, but ultimately disappointing basketball product, the time is now for McHale more than any other member of the Rocket's organization.

"Is there an ideal team? Yeah. For me, an ideal team would be two 7-foot guys that can flat-out block shots, rebound and score in the paint. When you find those guys, let me know."

The shadows cast by Hakeem and Sampson and Drexler and Horry will seem longer and wider now than they ever have before. The finality of signing Dwight Howard means that McHale can finally stop pining for a dominating duo. It's here. Now the biggest question to answer is whether McHale's deliverance will be more parting of the Red Sea and less wandering the desert for forty years.