Share All sharing options for: Patrick Beverley and basketball etiquette

Ever since the 1970s and 1980s basketball has always had a level of brutishness to it. We talk about these times often in the form of documentaries, movies, longform think pieces, and menial blog fodder like you're reading now. We look at the court etiquette from those years and mostly think fondly of a time when basketball was seemingly rougher and meaner before arriving to the conclusion that basketball isn't like that anymore. Except that it kind of still is.

Before fans smartened up and realized the vast sums of money that really drive everything it was easier to ascribe a sense of loyalty, passion and respect for the home team. As a result, we glorify those Wild West days of then when tempers flared as high as the Afros did and players saw fit to release those tensions on the court.

He moves about the court like some sort of agile, slithery creature using cunning and guile to get what he wants

It's probably for this reason that Patrick Beverley acts like an asshole. And it's probably for this same reason that we all think that he's awesome. Since he came on the scene two years ago, Bev has steadfastly built himself a reputation for being a, well the word most people use is "menace" but that simply translates to: Beverley can be an annoying piece of shit on the court. And instead of derision, Beverley receives mountains of praise.

If you had to compare his game with some sort of animal, I'd vote for the honey badger. He moves about the court like some sort of agile, slithery creature using cunning and guile to get what he wants. That's Patrick Beverley.

His style of play has had him exchange unpleasantries from everyone from Russell Westbrook to Marc Gasol. And that's bad-ass. He may be a motherfucker, but he's OUR motherfucker. We don't care that he does it by means that most do not consider kosher. If he played for the Jazz, I'd be willing to bet that there would be voodoo dolls of the man in the homes of several Houston residents. It's important to note that this doesn't mean that voodoo dolls of Patrick Beverley don't exist. Just not in Houston.

You also won't find any source of voodoo, or in this case, Santa Muerte against Beverley in the Rio Grande Valley.

It was there where he played with the Vipers in State Farm Arena that we got the chance to watch the Rockets in practice while they were in town to play the Warriors. After practice the players were milling around, some were still on the court shooting around, over by the corner of the court, there was the badger himself taking a pass from Nick Johnson and hitting threes. You watch him long enough and it doesn't take long before Badger gets into some sort of argument.

Turns out that Patrick Beverly is the kind of guy that gets mad when you question how many shots he sank in the corner threes drill. As Johnson learned when he made the mistake of only counting four. "I sank FIVE, dude!" Beverley says with a defiant look on his face. I'd seen the entire drill and counted four too but I sure as shit wasn't gonna say anything.

The rookie apparently decided not to as well. Good choice, Nick.

The following day we got to see open practice and I keep my eyes on Badger the entire time. On one occasion he reaches in and picks a steal loose from James Harden when they were just supposed to walk through a play at half speed. You could see Harden roll his eyes as Badger took the stray ball in for a dunk and the crowd properly applauded. Harden didn't say anything but the expression on his face would suggest that this isn't the first time that Beverley has pulled that shit.

And his demeanor doesn't end when he stops playing basketball. Trying to interview Badger is a lot like interrogating a Russian POW. I approached him after practice as he and Dwight were sitting next to each other shuffling with their shoes tying laces or whatever.

Coming into his third year, Beverly is the consensus starting point guard for the Rockets. I asked him if that affected his mentality at all knowing that he's a proven commodity now and he wasn't going have to fight for minutes. There is, after all, an entire documentary out there about how Badger has had a long road to the NBA. 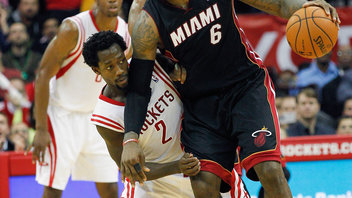 How good can Patrick Beverley be this season?

He looks me up and down for a moment. I can't be entirely sure, but I think he was probably thinking about whether or not he could kick my ass in a fight (he could). "I was a starter last year," he finally says to be flatly. Then he looks back down at his shoes. I'm certain he was annoyed with my question.

I asked him if he had set any personal goals for himself this season outside of the obvious ones, like a championship and such. Turns out he had. He says he's gonna be defensive player of the year, he says curtly. Then silence.

I ask him to elaborate, he declines.

He looks at me and leans back in his chair, I dunno why but his tough guy shtick made me feel like the time in seventh grade when this guy knocked a drink out of my hand in front of everyone, causing me to lose my shit and lay the kid out. I wasn't about to take a swing at Patrick for stonewalling me during a routine interview, but I can only imagine what it's like when he posts up in your face and throws a few elbows into you when you drive the lane.

Perhaps if I had more time with him I could grab a better sense of the way he looks at basketball. If he worries that he might alienate the majority of the boys club that makes up the NBA. Beverley worrying about people liking him is like wondering if a coyote gets sad because the sheep don't invite it to slumber parties.

I wrapped up the interview knowing I wasn't going to get anything quotable out of him and later found myself speaking with some of the other media flacks that were at the practice. It's a consensus that Badger is a straight up method actor when it comes to his heel-like persona.

Two years ago he was noticeably more amiable with the media, and by some accounts he's a perfectly nice human being away from the basketball court, but on it he's grown more adversarial over time. The entire shtick reminds of that old brand of basketball where people got hacked and it was not uncommon to respond with a demonstration of testicular fortitude.

Youtube has archived a number of examples that would suggest Beverley has a vast supply of testicles and fortitude. When we think of defensive anchor, we really mean "defensive enforcer." We use words like intensity and tenacity but in layman's terms it means we want someone to fuck shit up if someone is trying to bring that "weak ass shit" here. In Beverley, we have that.

So while there may be a number of other question marks around the Rockets roster, in Patrick Beverley you know exactly what you're getting. Barring injury, its easy to imagine a scenario where Beverley becomes the most hated NBA player in the league. And he'd probably not give a fuck.