Dwight Howard's time is now for the Rockets

Can the Rockets big man fulfill his destiny to be the most dominant interior force in the game?

Share All sharing options for: Dwight Howard's time is now for the Rockets

It's a question that's been impossible to ignore around the Rockets this offseason. The buzz is palpable, and the anticipation is building.

"Is Dwight Howard really back?"

Contract situation: In the second year of a four-year, $87 million contract. Has a player option for 2016-2017

Fun fact: "A great farter. He can fart. He can fart loud -- the loudest farts. Silent farts." - Big Baby Davis

To fully understand, what the "back" Dwight Howard would mean for the Rockets, we have to go back.

It's 2009. Howard has officially launched himself into the stratosphere of the NBA. He was named the league's Defensive Player of the Year for the first time in his fourth season. He was named first-team All-NBA for the second consecutive season (the second of five straight appearances. He's been at least the third team every season since 2007).

In 2009, Howard averaged 20.6 points a game and led the NBA in rebounds (13.8) and blocks (2.9) per game. He blocked 6 percent of all shots taken while he was on the court, according to basketball-reference.com. He had 7.6 defensive win shares (leading the NBA), second-highest total of his career (7.7 in 2011, when he finished second in MVP voting behind Derrick Rose). 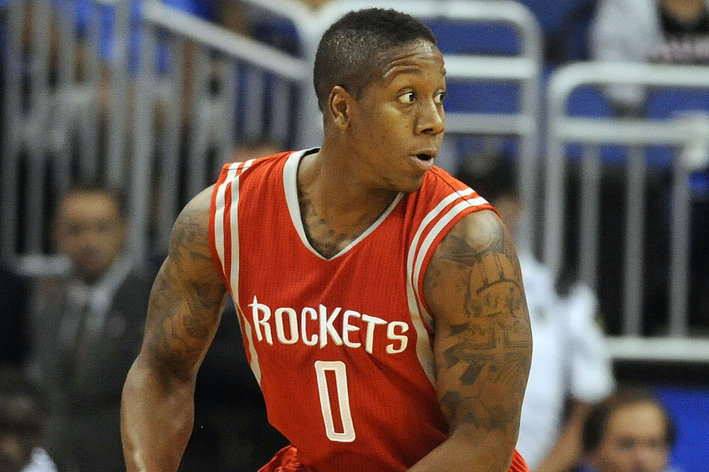 In the playoffs, Howard got even better. He grabbed 15.3 rebounds per game and shot 60.1 percent from the floor, leading the league in defensive rating (98) and defensive win shares (1.9). The Magic made the NBA Finals with no second star (sorry, Hedo), purely off of Dwight's dominance.

He was just as good in 2011, but the Magic didn't make it to the Finals. In 2012, he was already orchestrating his exit from Orlando when his back required surgery, sapping his superpowers.

Until, apparently, this year. Here are some of things that have been said about Dwight this offseason. From the Washington Post:

Summer time is usually the period when Howard likes to go on vacation and promotional tours, but he sought a simpler approach, focusing on healing his back and ankle, so that he could be that entertaining and explosively athletic freak once again. Declining to participate with USA Basketball, Howard spent much of his time in his hometown of Atlanta working out with Rockets teammate Josh Powell. His plan was to build off what quietly was a stellar postseason performance in which he was a dominant presence on both ends during a first-round loss to the Portland Trail Blazers.

Howard felt so encouraged by his workouts that he posted a video on his Instagram account last month in which he tossed a basketball off the wall of a gym and unfurled a windmill, tomahawk dunk. "I was doing those dunks and I shocked myself," Howard said with a smile. "Here I am, 280 pounds and I'm moving, doing all this stuff I was doing when I was 240. So, even the people that I trained with this summer, they were highly impressed.

"He's older, more mature and you can tell that he is feeling better physically," Olajuwon said. "I like what I saw. He is a very hard worker. He takes the job seriously and you can see that he has used some of the things we talked about last season and is making them part of his game."

"I could see last year when I worked with him in camp that there were some things that he could not do. Or they were things that he did not think he could do. The difference now is that he is fit and those doubts are gone. This is the player who can go back to being the best center in the league and the kind of player that can lead his team to a championship. I think he should be dominant at both ends of the floor."

By all accounts, Howard is in the best shape he's been in since his dominant 2011 season. It's easy to assume the Rockets will regress without Chandler Parsons and Omer Aisk back, but these projections simply aren't taking into account a scary reality: the Dwight Howard we saw against the Blazers in the playoffs -- the one averaging 26 points, 13.7 rebounds and 2.8 blocks -- might be the Dwight we get all year in Houston.

Even at less than full strength, Howard was still a terrific two-way player. Opponents shot just 48.1 percent at the rim against him, per NBA.com's player tracking data, and he had more steals per game than defensive stalwarts Serge Ibaka, Tim Duncan and Roy Hibbert.

Howard gobbled up 67 percent of available rebounds, a terrific number, but only a disappointing 37.5 percent of contested rebounds. Here's one area another offseason of healing in the back I think really helps him and the Rockets. With greater explosion and confidence to withstand contact, Howard should be more comfortable battling for tough rebounds. I wouldn't be surprised for him to up that number up to around 45-48 percent, up near league leaders in the category Robin Lopez and Andre Drummond.

On offense, Dwight was noticeably less aggressive than in his peak years. He scored 19.5 points per 36 minutes, which is actually above his career average (he played just 33.7 minutes per game last year, the least he's played since his rookie year). He shot 63.2 percent on shots near the rim, a very good percentage, but worse than Terrence Jones (66.9 percent) and far below league leaders Andrew Bogut (76.9 percent) and Tyson Chandler (71.8).

Among players with high-volume workloads close to the basket, Howard does look significantly better: he's second in the league in close-range percentage among the 30 or so players averaging more than 4 shots per game.

Despite that success, he can do better. Watch this dunk against the Miami Heat from the preseason:

How many times did he rise up and try to dunk a play like that last year. Maybe three or four times total? The Dwight of last year may have gotten an and-one layup out of it, to be fair, but he didn't dunk it. This looks great. This looks like change.

Defensively, his return to form athletically should boost his rim protection back to previous levels. Last year was the first since 2007 in which Howard blocked less than two shots per 36 minutes. His defensive rating of 101 was his worst since 2006 and he had fewer defensive win shares than any year he's been in the league since he was a rookie.

If Dwight Howard's athleticism and confidence is really back -- and a new, high-arcing free throw shooting form he debuted in the preseason, fingers crossed, could bring improvement -- then people are really sleeping on this team.