Can you taste it? Preseason has started, Dwight Howard's in foul trouble, and Basketball Reference has released its official player projections for the upcoming season, previewing every player's expected performance -- in terms of basic stats, per 36 minutes. Here's a brief rundown of what they say about Houston, and the perhaps unsettling conclusion on which B-Ref has landed.

Basketball Reference expects James Harden to largely repeat his per-36 numbers from last year - mildly surprising, considering he's only 25 and entering his third full season as a starter, but few would complain if he merely maintained last year's offensive production for years in the future. Since he was clearly the team's number one playmaker and scorer last year, it's hard to project growth based on his fit in the offensive scheme. Any improvement will likely come from him internally. And of course, Basketball Reference is mum on his defense. Let's leave that discussion to the rest of the internet for now.

I'm starting to sense a theme here. Basketball Reference projects Dwight to hold steady in pretty much every category, with even a slight regression in free-throw percentage (please oh god no) and Win Shares per 48 minutes. Even though there's been substantial optimism regarding a bounce-back year, one has to wonder what exactly a bounce-back entails - more forcing the ball into the post for iso plays? More than 13 rebounds a game somehow? Of course, the per-36 projected stats would be more encouraging if he could average more than 33 minutes a game like last year. Perhaps his regained athleticism will mean fewer fouls on defense. Without Asik off the bench, we know that keeping Dwight on the floor will be more crucial than ever.

And the theme continues. Intriguingly, Ariza's per-36 projections line up almost exactly with his actual performance last year for the Wizards, in which he averaged a shade under 36 minutes per game - around 14 points, a steal and a half, just over six rebounds and over two assists. Most crucially, B-Ref expects Ariza (who they say is nicknamed Switchblade? Anybody?) to largely keep his 3-point percentage near last year's career high of 40.7%, at 39.4. Check out his shot chart from last year, courtesy of Nylon Calculus: 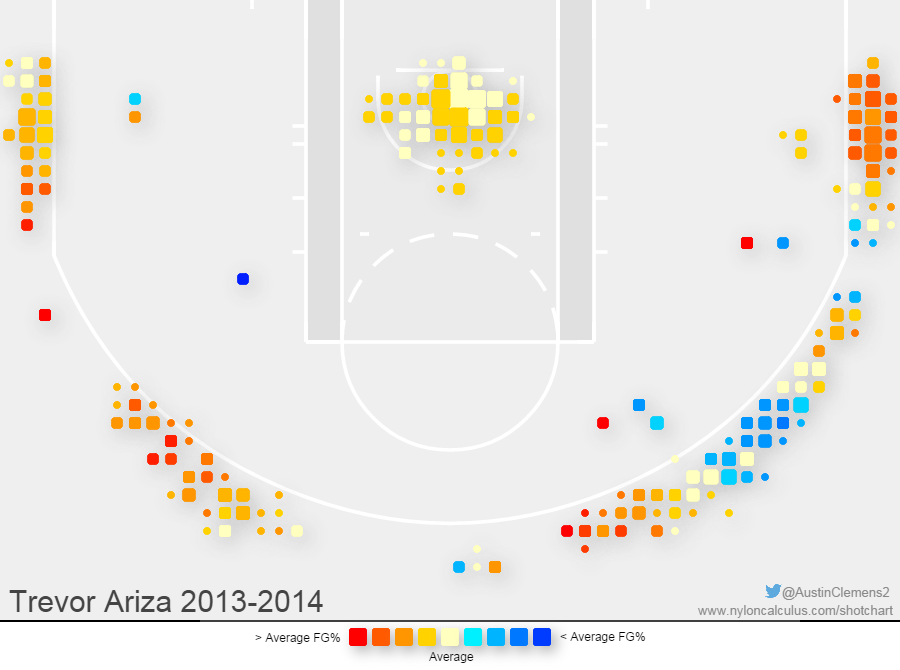 Ariza obviously benefited from John Wall's penetration by getting a lot of corner threes, and converting them efficiently. For all that Chandler Parsons brought, his heat chart shows a lot less from the corners. Hopefully that was more on Chandler and less on the distribution of Harden and Howard.

The Rest of the Team

Basketball Reference doesn't expect marked statistical improvement from any Houston Rocket, which is fair if a bit disappointing, considering where last year's stats got this team in the loaded West. It only serves to reinforce what we already knew - if this team is going to take the next step, it has to be a defensive improvement. There's just not much else the offense can really do.