Share All sharing options for: Patrick Beverley leads Rockets to 100-95 win over Suns

Patrick Beverley was only supposed to play 20 minutes and take it easy tonight.

There's not a single bone in Beverley's body that says "take it easy." The Berserker, in his first game back after sitting out seven straight with a hamstring injury, scored 19 points, secured back-to-back offensive rebounds on the game's key possession and made the win-sealing free throws. In typical Beverley fashion, he was absolutely everywhere, and the Rockets won 100-95 because of it.

Somehow, someway, the home team is 16-4 at the quarter-mark of the season. Once everyone is healthy, this is a no-doubter championship contender. Everyone on the roster can play, and win, against anyone.

Beverley finished with 27 minutes, pissed off Goran Dragic enough to draw an elbow to the ribs, played lockdown defense all over the floor and carried the Rockets without a healthy James Harden at the end of the game. Beverley also had 6 rebounds, 3 assists, a steal and a block and hit five three-pointers.

Francisco Garcia left the game with an ankle injury and James Harden's lower back tightened up on him. He tried playing through it, but went to the locker room slightly early looking in a heck of a lot of pain. He's a warrior and he'll likely try to play Wednesday night in Golden State.

Before he got hurt, Harden was on track for a triple-double; it wasn't his best shooting performance (5-21, 1-9 from deep) but he finished with 15 points, 12 rebounds, 7 assists, 2 steals and 3 blocks. He's finding a way to be a two-way force even when the shots aren't falling; that's what MVPs do.

The Rockets' defense never let up. The Suns went on a few runs, pulling the game to within five in the fourth quarter but absolutely everyone was locked in for Houston. Jason Terry was able to hide on P.J. Tucker, Harden guarded Morris twins for much of the night, and Trevor Ariza absolutely locked down Goran Dragic. Dragic finished with 15-6-4 on 5-14 shooting and was frustrated all night. He got a technical for shoving Tarik Black and would have been ejected if the refs had called that elbow he threw to Bev.

There's very little left to say about the Rockets on that end of the floor; from players 1-15, they are among the very best defensive teams in the league. This was the 20th game of the year and they're still locking down teams with or without Dwight Howard and/or Beverley in many of their games. The Suns hung 118 on the Mavericks the previous night and they're the fourth-best offense in the league; tonight, they shot 36.6 percent and the Rockets out rebounded them 57-40.

Patrick Beverley -- See above, but I'll add this: the Rockets didn't hit a field goal for seven minutes in the fourth quarter before The Berserker hit his fifth trey with 2:29 left. The shot put the Rockets up 95-85, and although the Suns would get closer again, Beverley singlehandedly kept them at bay, with stellar play on offense, defense and the glass. The Rockets went 6-1 in the seven games he missed, but MAN is this a different team when he's out there. His effort changes things. Because of how hard he works, the Rockets always have a shot in the typically sloppy end-of-game situations. 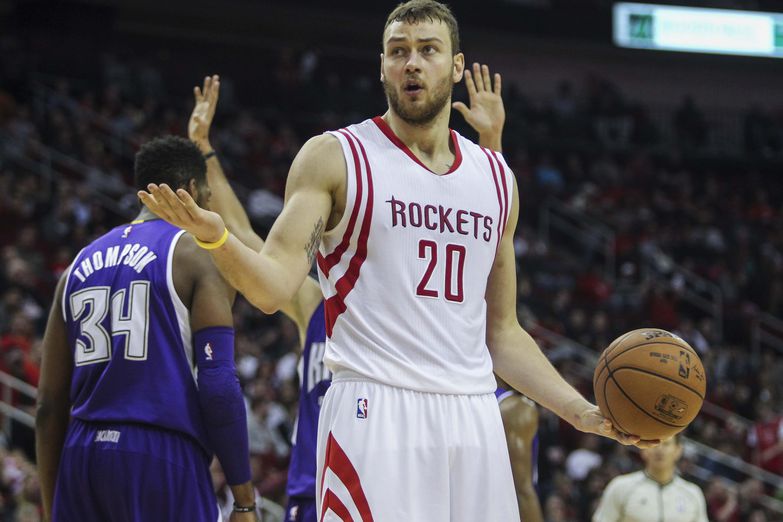 Donatas Motiejunas is developing into a reliable big man right before our eyes.

Donatas Motiejunas -- Donuts finished with 16 points, 11 rebounds and 3 blocks. He was huge in the Rockets' major rebounding advantage and his defense was part of the reason the Rockets' shooting drought ended with them maintaining a seven-point lead and keeping the win. He's one of the Rockets's three best players nowadays, considering the injuries.

Kevin McHale -- It's really time to give this guy a ton of credit. Yes, J.B. Bickerstaff deserves a round of applause for the league's most surprising stifling defense, but McHale is the head coach. He's deftly inserted the right guys in the game at the right time, has coaxed consistency and post play from Motiejunas and everyone is playing their asses off. Getting everyone to buy in, making the right subs at the right time and developing players are a head coach's three most important jobs. He's doing them all better than anyone else in the league right now. Simple as that.

Injuries -- James Harden's back is hurting. We'll get an update soon, I'm sure, but this is the one guy, it seems like, the Rockets can't do without. Hey, basketball gods, we get it. Spread the hate around please.

Injuries -- Who knows what happened to Cisco. Again, we'll find out more soon, but Rockets fans aren't too worried about him. Nick Johnson again played well (don't have room to talk about him, but we will do more of that soon) and Troy Daniels is still hanging around somewhere. Garcia has replaced the suddenly useful Joey Dorsey as the Rockets' worst player. You at least want him healthy and available, though.

Injuries -- Dwight Howard isn't coming back anytime soon, McHale said before the game. No timetable on Isaiah Canaan, Terrence Jones or Kostas Papanikolaou either. If you count Harden, that's now SIX ROCKETS PLAYERS out with injuries. The Rockets have no one they can bring up or sign without cutting someone either. Who do you cut from a 16-4 team where everyone is getting minutes?