How the Rockets have thrived despite the injury bug

Which unsung heroes have stepped up to fill the voids of Dwight Howard, Terrence Jones, Patrick Beverley, and Isaiah Canaan?

Share All sharing options for: How the Rockets have thrived despite the injury bug

Without key players like Dwight Howard, Terrence Jones, and Patrick Beverley, unlikely contributors have picked up the slack for the Rockets. Howard, the Rockets' defensive leader, has been out since November 19 with a strained knee. In the games since then, Houston is 6-1 with impressive wins over the Grizzlies, Kings, Mavericks and now Suns sans Howard.

When some of the best players are out of the lineup, everyone else is expected step up their game. When teams succeed without their star player, Bill Simmons calls it the "Ewing Theory." In the 1999 NBA Playoffs, Patrick Ewing tore his achilles in game 2 of the Eastern Conference Finals. The Knicks seemed doomed, but they won three out of their next four games and advanced to the finals.

Without Howard, Jones, and Beverley, James Harden has been excellent... but he is expected to be. Since Howard's first DNP, Harden has averaged 27.5 points, 6 assists, and 6 rebounds per game. Although those numbers aren't much better than Harden's season splits, he has been more efficient and has found his stroke from three in recent games; he's 8-13 from downtown in the last three games.

There are players, however, who had high hopes but have been atrocious not only sans Howard, but all season. This exclusive club has only two members: Troy Daniels and Francisco Garcia. Those "three-point specialists" have shot a painful 24% and 27% respectively.

But let's focus on the positive contributors. The highest-scoring lineup in the past six games includes Jason Terry, James Harden, Trevor Ariza, Donatas Motiejunas, and Tarik Black. That five-man combination shoots 47 percent from three and has a +/- of 5.6, the best of any Houston lineup. It seems like Kevin McHale will roll with those five as long as they continue to shoot lights out.

What Canaan brings to the Rockets 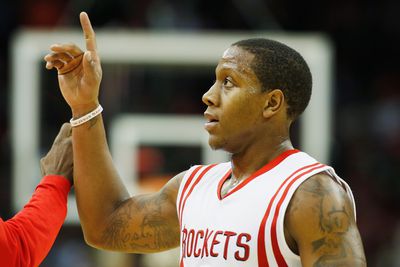 When he returns, Canaan will be the firepower of the future for Houston's bench

SIDENOTE: Isaiah Canaan was outstanding without Howard, Bev, and T-Jones, but he suffered an ankle injury that has sidelined him indefinitely. Canaan was exactly the sparkplug the Rockets needed, scoring in bursts both off the bench and in the starting lineup, but he hasn't played in the past three games and there is no timetable for his return.

Besides Harden, who is supposed to step up while his buddy watches from the sideline, Donatas Motiejunas, Nick Johnson, and Tarik Black have brought their A games.

Donatas Motiejunas: Motiejunas is gradually transforming into the player we all hoped for when the Rockets drafted him with the 20th pick in the 2011 draft. His post-game has improved dramatically and he has become a smart passer. His defense leaves more to be desired, but he competes.

Xiane Note - For those of you who want to see what I said about Motiejunas the rookie, the wayback machine will take you to the days of yore (2012 to be precise).  As usual I was optimistic, but we're seeing DMo do that now.  Also note what he looks like today versus that picture in the article.  235?  Way low.

In the last six games, "Donuts" has played 32 minutes per game (7 more than his season average) and has been the secondary scorer behind Harden. Averaging 15 points per game, Motiejunas has thrived offensively without the aforementioned players. He scored a career-high 21 points against the Kings and followed that up three days later with a 20-point performance versus the Bucks. Last night, he finished with 16 and 11 and terrific rim protection. That's not bad, not bad at all.

Tarik Black: Black's job description as a Houston Rocket is clear: run, jump, and be big. On offense, Black is expected to set screens, go after offensive rebounds, and be strong in the paint. He has completed those first two objectives with ease, but he has at times been soft around the hoop. He often goes up for layups when he should go up strong and power in a dunk.

Black has statistically played well, averaging 7.3 points and 6.7 rebounds -- much better than his season numbers of 4.8 points and 5.5 rebounds per game. Although Black has done his job, he will likely return to under 20 minutes per game once the immortal Howard returns.

You come to appreciate just how good Dwight Howard is when you see Tarik Black and Joey Dorsey fail to do 75 percent of what he does. Black and Dorsey have combined for 9.8 points and 12.2 rebounds per game in the past six games. Compare that to Howard's season averages of 18.8 ppg and 11.3 rpg.

Nick Johnson: It was just a matter of time before Johnson got his opportunity in the NBA. He was a standout scorer at Arizona University and tore up the D-League in his short stint. Now in the Association, Johnson has made the most of his minutes by playing hard on defense and attacking the basket with reckless abandon. Johnson has scored nearly half of his points in the paint, albeit the small sample size.

Dennis Johnson's nephew has impressed despite the lack of minutes. He has proved that he deserves more playing time, at least until Beverley and Canaan return. He can surely take some of Troy Daniels and Francisco Garcia's minutes as they haven't shot the ball well all season. Johnson has much more "big-game" potential than Garcia and Daniels, for he can be effective in limited minutes.

In the game against the Clippers, he came in for just 6 minutes at the end of the blowout game and scored 8 points with two three-pointers.

He also banked in the driving game-winner against the Minnesota Timberwolves in overtime.

Even with a fully healthy squad, Johnson has proved that he deserves the chance to play legitimate minutes.

Note: All statistics are accurate as of Saturday, December 6.