DeAndre Daniels is a player that turned a lot of heads in the NCAA Tournament. Could the Rockets take him in the second round?

If you look at the Rockets roster, you see a talented starting five, a pair of established bench players, and then, well, a giant question mark. Troy Daniels might have a fit as a three point shooter, but the Rockets are in serious need of a infusion of talent into their bench, especially on the wings where Francisco Garcia and Omri Casspi were absolutely dreadful last season. Could UConn's DeAndre Daniels fit into that unit? Let's take a closer look at the junior forward out of Connecticut.

Before Daniels' junior year, he wasn't on a lot of people's radars because he didn't have a calling card on the offensive side of the ball. He could make nice cuts off the ball, had an athletic profile to finish at the rim, but didn't have a consistent outside shot or much ability to create offense. However, in his final season, he showed off a much improved perimeter jumper and flashed the potential to score in the post, using his length to shoot over defenders.

His shot is a bit funky, but it was effective for him during his junior year. However, his release is a bit slow and he could use some work or he might get his shot blocked a lot more in the NBA. When he spots up, he catches the ball, brings it down well below his waist before bringing the ball back up and firing a pretty, above the head shot. 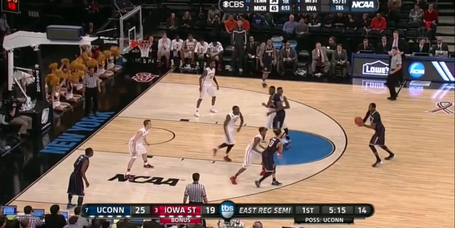 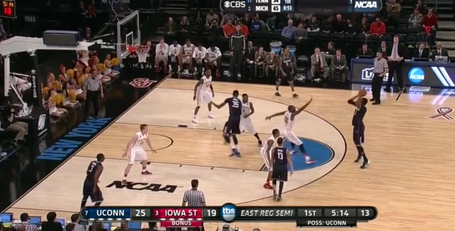 As you can see here, Daniels catches the ball at the letters in his jersey, brings the ball down below his waist, before firing up a three. In college basketball, he can afford to make this move as he got a lot of space, but with quicker and smarter defenders in the NBA, he's going to have to tighten up his shot or he will get stripped and swatted pretty regularly.

This trend of Daniels thriving against weaker competition in a somewhat unsustainable way continues with his post game. Daniels is long and athletic, allowing him to get a shot down low against college opponents. Still, he is fairly weak physically, and isn't able to back down players to take full advantage of his size. In the NBA, as the players guarding him start to match his size, he probably won't be able to get the same shots.

The biggest knock on Daniels on offense, however, isn't his slow shot or his lack of strength, but rather a complete and utter lack of passing ability. Daniels averaged a crazy .4 assists per game during junior year, and he will have to improve that if he wants to contribute in the NBA.

All of this is sounding fairly pessimistic, but it is simply to show that despite some of Daniels' success at the NCAA level, he is still a long term project instead of an immediate plug-and-play guy. The NBA is littered with players like Daniels who had success in college but needed to make changes to compete at the NBA level, and Daniels has shown off a number of tools that could be very useful down the road.

His shot will likely be his biggest calling card, but he needs to quicken his release and stop bringing the ball down so low or he won't be able to get open with quick rotating defenses. In the post, he needs to bulk up big time, but he could have the makings for a decent post game that could come in handy. As for the passing, good luck.

While Daniels was a fairly strong offensive player at UConn last year, his defense was a different story. Daniels is quick, long, and can get off the floor in a hurry, but outside of that, his defensive acumen is pretty lacking. In the tournament, Daniels far too often allowed his opponent to get into the paint with ease, and though there were times where he recovered pretty spectacularly (averaging 1.4 blocks per game), he put himself in a bad position far too often.

And if you were hoping that Daniels could step in as a stretch four, think again. His lack of strength allowed post players to bully him pretty easily down low when Kevin Ollie stuck him in the front court as a power forward or center. He created mismatches on the other end, but gave it right back on the defensive side.

He has a chance as a small forward to be a good defender because he has all the tools, but he is going to need some serious coaching up before he gets there.

Bottom Line: Could the Rockets draft him?

If Daniels is sticking around when the Rockets pick in the second round (they have the 42nd pick from the Knicks, and traded away their own pick), Daniels would be a great selection. He has a long way to go before being a serious contributor, but when you get to the second round, you start looking for skills that stick out, not necessarily a player that can jump right into the rotation. In Daniels, the Rockets would have a player that makes up for his lack of polish with an intriguing combination of length, athleticism, and outside shooting ability.

Put him in the D-League for a year with an NBA lifting regimen, and the Rockets just might have a chance to get a talented bench scorer out of this pick. That would be a great result for a 2nd round selection.