James Harden had one of the more frustrating defensive seasons in recent memory for the Rockets this year. We look at how he can get better in 2014-15.

It was no secret that this past season James Harden played some of the worse defense seen from a superstar in the league. You could wish this was hyperbole but thanks to YouTube there is a 12 minute mix video of his efforts for the whole world to see.

And the world saw. And they laughed. And laughed. And laughed. James Harden turned into James Haren (Lack of D!). Harden was supposed to take a mini-leap with Dwight Howard. The prevailing thought was that if Harden didn't need to expend so much energy on offense because of Dwight he would focus more on the perimeter defense that the team solely needed. We were wrong. But what if we were just witnessing a star biding his time to unleash something unseen in the NBA.

It takes many qualities to be a good defender in the NBA. A combination of effort, talent, awareness, physical abilities and so on and so forth are the hallmarks of the best defenders has to offer. Not James Harden though. He has something to show the world that would tip the hand in his favor. 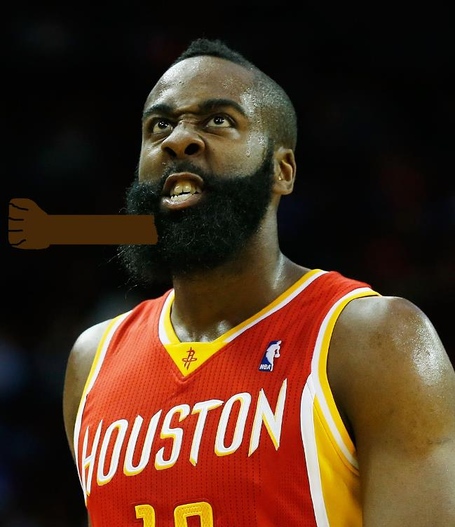 (It's a fist. Don't laugh. My paint skills were left behind in the 90s)

James Harden has an extra arm and fist under his beard. There have been many theories on why he would let his beard grow to such ridiculous proportions but now we know the truth. It is a ridiculous truth but it has been there all along. For two seasons James Harden has been growing a third arm to help him on his defensive assignments.

What are the benefits of Harden having an arm under his beard? I'm not a sports analyst but I can confidently assume that the opposing player would be freaked out when seeing it up close and personal. That is a mental edge going in favor of the Rockets. If you were facing James Harden and he had a smaller arm coming from his beard would you even comprehend it at first? Would you pass the ball to a teammate to avoid the arm and beard combo from coming closer? Would you shoot the ball as fast as you could hoping the smaller arm doesn't face guard you? Would you even be able to dribble the ball while staring at that arm flailing about in your face? Maybe. Maybe not. Unless you are Kobe because he is a robot who doesn't care.

There are numerous benefits to having a third arm which shall be dubbed 'Armden' from this point forward.

Hand over Fist; Fist over Beard

The Rockets as an organization have kept their cards close at hand so it comes to no surprise that the development of Armden has been a well kept secret.  But now that the secret is out it is on the NBA to figure out how to handle an unprecedented turn of events.

It is on the Rockets to figure out how to keep the procedure of the arm hidden from other teams. It is on McHale to instill a defensive mindset on Harden and Armden. It is on Harden to make sure that the arm does not go rampant and start murdering people. It is on us to accept that Harden has a smaller arm under his beard named 'Armden'.

[Editor's Note: This is one of the many writing samples I've received from writers interested in joining the staff. As I work through reading more of them, you'll see more posted on the site. -Patrick]