Why the Houston Rockets could still chase Eric Bledsoe

The Rockets appear to be done with their summer business. However, the one wild card out there is restricted free agent Eric Bledsoe. Why a number of moves have put them in position to land the Suns point guard.

Share All sharing options for: Why the Houston Rockets could still chase Eric Bledsoe

At this point in the off-season, most teams have shifted their focus from signing free agents towards in-house player evaluations, personnel hirings, and season planning. Some executives even go on vacation, getting away from the craziness that is NBA free agency. However, amidst all of this, one prominent free agent remains: Eric Bledsoe. With Greg Monroe reportedly opting to stay in Detroit on a qualifying offer, Bledsoe stands head and shoulders above the rest of the free agent crop, stuck in free agency limbo. Though the Rockets have not been heavily connected to Bledsoe, their moves this summer have positioned them to make a splash on a player like him. Let's look at why this deal could happen.

On paper, Eric Bledsoe fits the Rockets extremely well. He's an athletic specimen, excellent in transition and with the potential to be a terror defensively. When he is clicking, he is one of the best in the league on the defensive end, and a combination of him and Beverley at the point guard spot would help James Harden out tremendously with defensive responsibilities.

He's the quintessential two-way player and would be a serious upgrade over Patrick Beverley offensively. In his first season as a starter, he had a career year offensively, scoring very effectively in the paint and averaging 17.7 points for the Suns. 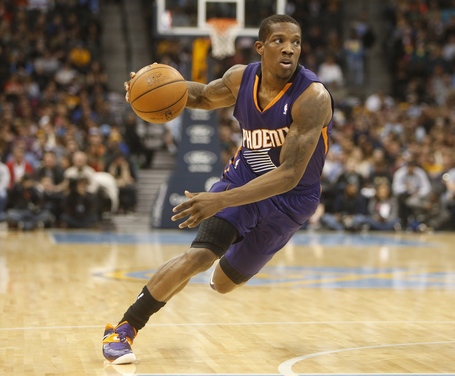 But the Rockets are over the cap, right?

Here's where the moves the Rockets have made in the last few months have positioned themselves to sign Bledsoe. Though the Rockets have operated over the cap this off-season, they have acquired a number of non-guaranteed contracts that give them flexibility in any trade they make. If the Suns were willing to accept Kostas Papanikolaou and his $4.8 million salary for next year, the Rockets also have the non-guaranteed deals of Alonzo Gee ($3 million), Scotty Hopson ($1.45 million), Josh Powell ($1.3 million), and others to offer. The deal would have to wait until the middle of September as Papanikolaou is not yet eligible to be traded, but it could be agreed to in principle in the meantime.

An offer of Papanikolaou, Gee, and Hopson for Bledsoe in a sign-and-trade would allow the Rockets to offer a starting salary of $14.25 million to Bledsoe, just $500,000 from his maximum salary allowed under the CBA. If the Suns are able to clear an extra roster spot, the team could include Powell or Robert Covington, allowing them to offer Bledsoe the full maximum, a four year, $63 million deal.

After waiving the non-guaranteed deals, the Suns would essentially be accepting Papanikolaou and whatever draft picks the Rockets can offer for Bledsoe. If the team were to offer the Pelicans first rounder and perhaps another pick, the Suns would have to seriously consider the deal, especially with their relationship with Bledsoe reportedly disintegrating by the day.

It's important to note that the Suns have yet to show a willingness to let Bledsoe go, but if he threatens to sign a qualifying offer and leave next summer like Greg Monroe, the Suns risk losing him for nothing. With Isaiah Thomas and Goran Dragic under contract, the Suns are positioned to play out next season without Bledsoe, but he would obviously still command a large haul in a trade.

The bottom line in a deal like this is that if the Rockets were to engineer a massive sign-and-trade offer for Bledsoe, they'd be locking themselves into a core of Harden-Howard-Bledsoe for the foreseeable future. What you would see on the court next season would be near the final form of that roster. Daryl Morey was unwilling to commit to a core of Harden-Howard-Parsons, but would he be willing to commit to that same core with Bledsoe substituted for Parsons?

Bledsoe is the superior player, but he's injury-prone, and would cost a lot in terms of both salary and assets. The Rockets would be capped out, short on draft picks, and without the flexibility that Daryl Morey values so highly. What a move like this would say is that the Rockets believe Bledsoe is a good enough player that they could win a title with him in the next three years. To date, there hasn't been many reports on a potential deal with the Rockets, so perhaps they don't feel that he is at that level.

Looking forward, if the Rockets' six best players were Harden, Howard, Bledsoe, Beverley, Ariza, and Terrence Jones, it would be the best roster they have put together in a long time. If Bledsoe stays healthy and continues to improve his defensive consistency, that is a very dangerous team in the West. Whether it's championship caliber is another question.

Much of this premise is speculation, but one thing is clear. If the Rockets want Bledsoe, they have positioned themselves very well to land him.