Share All sharing options for: Why the Rockets should want James Harden to score less this year

I would like to first start this column by saying, by no means mean do I think James Harden is due for a regression nor do I think he will be worse in any way this season. Short answer: the team is better... The long answer is below.

Last year, James Harden finished the regular season scoring 27.4 points a game, which was good enough to be runner-up to Russell Westbrook for the NBA's scoring title despite leading the league for a majority of the season (and in total points).

Chef Harden and his Step-Back Platter 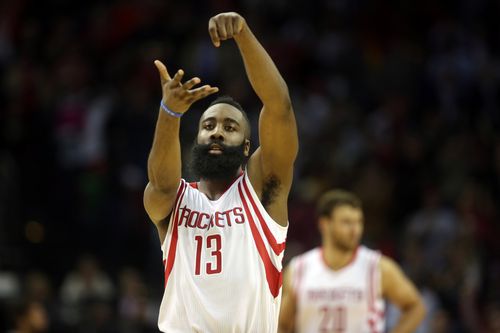 Harden's offensive game took a major jump forward, his step daddy (Harden's version of the step back) was deadly and he also became the most fouled player in the league.

The other reason Harden scored so many points: plain and simple, he had to. With Dwight Howard missing a healthy chunk of the season — there goes 15-20 points a game — the Rockets were forced to go to Harden even more.

Harden, of course, delivered, but it showed the Rockets they need more punch than just him. Last season, Trevor Ariza was the team's second leading scorer (outside of Howard) with 12.8 points a game. It's fantastic to get that from Ariza, but that's third or fourth scoring option numbers, not your second best.

If you can take any one thing from the Warriors, Cavaliers, or any other top notch team in the NBA, it's that you need a go-to secondary or tertiaryplaymaker.

Harden also agreed with this theory in his exit interviews, he made it know he wanted a true Robin to go with his Batman... Another scorer, another ball handler, another guy who has to be accounted for almost as much as him.

Enter Ty Lawson, who is exactly that guy I described above. He scores, handles the ball and has to be accounted for. Lawson the past two season has averaged 15+ points and 8+ assists a game leading his team in both categories over that time.

So how does Lawson affect Harden?

Whether Lawson starts or not (he likely will start), Harden and Lawson will see lots of time together on the floor. Harden now will give up the ball more to Lawson, who then will dart and dive in and out of the lane looking for the open shooter or a lob to the bucket.

Yes, Harden will now get more open looks as the result of the defense paying attention to the quick-twitch Lawson, BUT the 18.1 field goal attempts (seventh-most in the league) will likely get cut by a few with Lawson on the court.

Now, it doesn't mean just because Lawson is with the Rockets he's going to get his 12.3 attempts like he did last year — he was pretty much the only option with the Nuggets — but he will get a lot because he is that good of a player.

Let's say he gets 10-11 field goals a game. It has to come from somewhere, and it will likely come from Harden's shots.

As a result of Harden giving up some of his shots, his assists numbers could likely become even bigger, as well as his secondary assists.

Because it's not just Harden passing to Lawson for a shot, Harden now will find Lawson as he drives, only for Lawson to find another shot for someone else; a corner three; a lob to a big; and on and on.

Harden's numbers scoring numbers are likely to get a little smaller, but it should make everyone else's numbers grow.

Hardenm with the addition of Lawson, could be giving up two, three or even four points a game, but that means an extra dunk for Howard or Clint Capela, or a three for Corey Brewer or Jason Terry.

Having another playmaker could hurt Harden's numbers, but it will make him and the team a hell of a lot more deadly.