Ty Lawson will need to change to fit on the Rockets

He'll bring some necessary skills, but he'll also have to adjust to Moreyball.

Share All sharing options for: Ty Lawson will need to change to fit on the Rockets

When the Rockets traded a heap of spare parts and a first-round pick for Ty Lawson, it felt like a missing piece of the puzzle had finally been added. A point guard with All-Star talent and an outside shot — without much of a defensive pedigree, sure, but with the offensive skills that could finally help the Rockets express the ideals of Moreyball.

Rockets fans who had unbridled fantasies of the perfect Moreyball point guard had to be given pause, though, by how Lawson actually has operated to this point in his career:

Patrick Beverley didn't come into the NBA with much offensive talent at all, but didn't hamper the Rockets' efficiency on offense simply because he won't take inefficient shots. Ty Lawson will have to change his diet of shots considerably from what he's used to, whether he's playing with or without James Harden.  But the strongest evidence that he will change comes from last season, when Josh Smith drastically reduced the number of long two-pointers he attempted while on the Rockets. Lawson can reasonably be expected to do the same. But that's also not the primary concern with his fit.

In some ways, Lawson's pairing with James Harden resembles the Dwyane Wade-LeBron James partnership. Both spent the last season being the unquestioned lead ball-handler for offenses that revolved around them. Lawson got a little help from Danilo Gallinari late in the season, but he still ranked seventh in the NBA in total touches last season, according to NBA.com. Harden ranked sixth. Those numbers should go down now that they're on the same team (although their minutes could, and should, be staggered).

That'll be an adjustment, but last season, more than 50 percent of Harden and Lawson's shot attempts from 24-plus feet were assisted. The Rockets don't create midrange shots for others, so the two players should be accustomed well enough to spotting up beyond the three-point line. But because of their primacy in their respective offenses, neither of them shot the ball from the corner much at all. It will be interesting to see if the slashing of one will allow easier shots for the other.

Lawson shot less than 10 percent of his three-point attempts from the corners last season, which is in stark contrast to Patrick Beverley's 40 percent mark. Will Lawson find the spaces Beverley did, or will he stay above the break where he's been his whole career? McHale might very well run Lawson, Beverley and Harden together for stretches, which would probably keep Lawson away from Beverley's spots.

In a less statistical sense, the real question will be with feel. How will the halfcourt offense flow with Lawson? He's such a gifted ballhandler and penetrator that it's hard to imagine it will get worse, but will he be able to stay in rhythm if Harden's got the hot hand, or vice versa?

This is likely the biggest reason Kevin McHale hasn't named Lawson the starting point guard. There's an argument to be made that he can be most valuable when Harden's off the court, because they share so many skills. But their overlapping skills could also make the Rockets harder to defend. 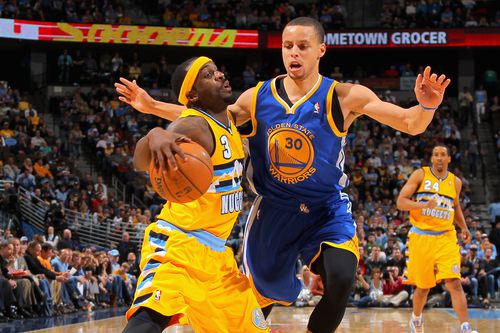 Lawson's defense can't be ignored either. Sure, the Rockets kept winning with the elderly Jason Terry/Pablo Prigioni pairing while Beverley was hurt last year, but their defensive shortcomings were more based on athleticism than discipline. Lawson's a question mark on defense until we know how well he can execute J.B. Bickerstaff's schemes, and shortcomings there could influence his usage. With the defensive pedigree of the rest of this roster, however, it's hard to imagine him dragging them down too far.

There was concern when Lawson was acquired that the alcohol issues that forced him out of Denver would affect his play in Houston, but we haven't heard a peep about it since — understandable, since we're still in the honeymoon phase and he's fresh out of rehab.

By all accounts, he's hit the ground running, which has allowed the optimism for Lawson's upside to rule the conversation. Let's hope the most important change Lawson makes on the Rockets is the one that allows him to be happy and healthy.