Clint Capela is dominating the pick-and-roll, earning his nickname

Share All sharing options for: Clint Capela is dominating the pick-and-roll, earning his nickname

The Rockets' offensive system is not complicated. There's a ton of high pick-and-rolls for James Harden — he's got 53 plays already as the PnR ball-handler through the first seven games, 11th-most in the league, per NBA.com — shooters around the perimeter to swing the ball around. Everything else is a variation on that basic set.

It's that simplicity that has led to lulls that have Rockets fans pulling their hair out at times and bashing head coach Kevin McHale on social media and in our colorful comment section. But it also allows athletic big men to thrive, and that's exactly what it's done for Clint Capela early in the season. The Swiss Roll is rolling and dunking his way toward becoming a terrifying offensive bench cog.

Friday night against the Kings, Capela got the start with Dwight Howard sitting on a back-to-back, and he notched his first career double-double with 13 points and 12 rebounds. Look at his highlights from the first quarter, and look how effective he is on dives to the basket.

The Swiss Roll is shooting 79.4 percent from the floor, leading the NBA

Capela has a terrific sense of timing, knowing to put himself not only in position to make the catch and give Harden a lane to pass the ball into, but also in a spot where he can finish without putting the ball on the floor.

The numbers bear it out: through Saturday's games, he's averaging 1.18 points per possession as the roll man in the PnR, scoring on 63.6% of his rolls, putting him in the 79th percentile in the league. Part of the reason that he's so effective is he's been insane at finishing: The Swiss Roll is shooting 79.4 percent from the floor, leading the NBA, among players with at least 11 attempts (Kendrick Perkins has made 8-10 shots on the year, in case you're curious about the qualifier).

It's no surprise he's developed like this: he's got Dwight Howard, one of the league's most dominant roll men over the last decade, in his ear, showing him the ropes. Many don't consider Dwight a leader, but he's shown a complete willingness to take young players under his wing, and Capela is no different. The Swiss Roll doesn't have quite as many natural gifts as Superman did when he entered the league, but he's not far off.

We saw this coming 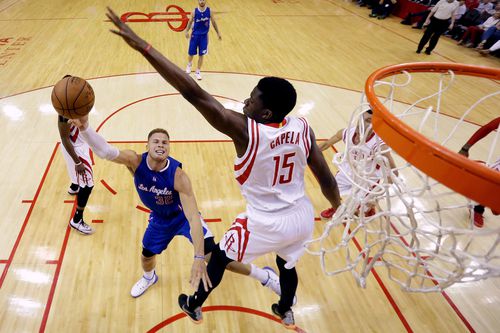 On Sep. 3, we wrote that a breakout was coming. Not to brag or anything.

Another play Kid Capela has been Superman-esque: the putback. According to NBA.com, he's in the 100th percentile — you read that right — on putbacks, making nine of his 10 attempts so far. Only three guys have made more putbacks this year: Ozymandias Andre Drummond, Enes Kanter and Kosta Koufos. Those three average 38, 21.4 and 25.7 minutes a game, respectively. The Swiss Roll is averaging 18.8.

All of this is to say: Clint Capela is really good. He's not merely a really good prospect anymore (although he's still that, rest assured), he's simply a really good player. He has some things to work on: he's only taken 10 shots from farther out than three feet so far, and he's made a not-terrible 50 percent of those. But he has no jump shot whatsoever. That is years away from developing, if it ever does (Dwight's never did).

The biggest issue at this point is the fouling. He's at 5.5 per 36 minutes, and considering a Dwight Howard injury could be around the corner at any moment, that's got to come down. Capela is good enough that he now has a responsibility to avoid silly fouls — especially early in games — and stay on the floor as much as possible.

But that's a nitpick. Five and a half fouls in 36 minutes isn't fouling out, it's just coming close. This is small-sample-size theater to the max, but Capela has .238 win shares per 48 minutes so far this year. Rudy Gobert — who Rockets fans would have no problem watching Capela develop into — averaged .206 last year while finishing No. 3 in Defensive Player of the Year voting.