Marcus Thornton's emergence has been a pleasant surprise in Houston

Forced into the lineup due to ineffectiveness and injury, a secondary offseason signing has proven to so far be the most important one.

Share All sharing options for: Marcus Thornton's emergence has been a pleasant surprise in Houston

It's not always the splashiest moves that end up helping a team the most. In the lead up to the season, the Rockets' offseason trade for point guard Ty Lawson was thought to be the piece that would put them over the top for a title run. And it still may be.

But as Lawson's looked unsure of himself and gotten off to a slow start to the tune of 10.9 points, 5.7 assists on just 35.3 percent shooting along with negative offensive and defensive plus-minuses, it's instead been one relatively under-the-radar offseason move that's helped pull Houston out of it's season-opening malaise.

Marcus Thornton was brought onto the team primarily as a spark off the bench when the team needed some shooting. The veteran swingman was thought of as too streaky and too much past his prime to offer anything more than the occasional offensive outburst.

Thornton or Jones: Who to start? 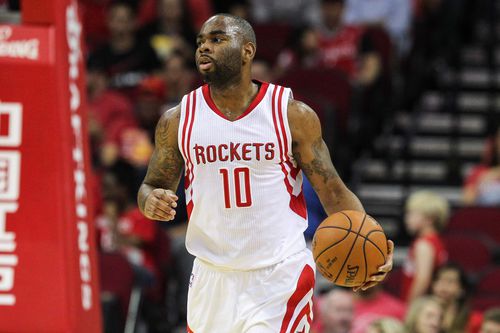 McHale has a decision to make. We have some ideas.

There was a reason the Rockets are his fifth team since the start of the 2013-2014 season. He hasn't averaged double figures since the 12.7 he had off the bench in the 2012-2013 season with Sacramento, he hasn't had a truly good season since averaging 18.7 points, 3.7 rebounds and 1.9 assists with the Kings the year before, and he's just a 42.9 percent shooter for his career, including sagging to under 40 percent in his last two combined seasons.

Make no mistake, the Rockets were taking a low-risk flier on an old vet still looking to prove he had a place in the Association. This team requires shooters to create space alongside James Harden and Dwight Howard, and maybe, just maybe, Thornton had enough left in the tank to make a few opponents pay from deep for doubling-down on the team's two superstars.

But a funny thing happened as the team got off to a sluggish start and lost power forward Terrence Jones to injury (again). Thornton was inserted into a small-ball lineup by coach Kevin McHale, and proved not only does he still have that sweet stroke from downtown, but he's also still capable of a lot of other things as well.

The Rockets are 4-0 since Thornton was inserted as a starter (4-1 since he started getting minutes), and his overall play alongside Harden and Howard, not just his shooting, is one of the main reasons for the turnaround.

Although a lot of people (myself included) have been surprised that Thornton had more to his game than just shooting range, McHale said he knew all along that Thornton was well-rounded, telling the Houston Chronicle's Jonathan Feigen:

"He's a very good passer. He's a good on-ball defender. All of our guys have to get better as off-ball defenders. But he's kind of one of those old time (types.) He's a baller."

Thornton proved McHale true by using his strength to matchup at times with Blake Griffin in the block during Saturday's game against the Clippers, but McHale did admit to Feigen that some aspects of Thornton's play even surprised him:

"Marcus can also dribble drive. He'll attack, and he's a very good passer late. That's the one thing I found out about Marcus. He'll get on top of the rim and find people late."

Thornton's all-around game has him on early pace for a fantastic comeback season. In an admittedly small sample-size, Thornton is averaging 16.6 points (his best since 2011), 4.6 rebounds (his best ever), 2.2 assists (also his best since 2011) and 1.2 assists (best since 2012) on 45.3 percent shooting. He also shoots 40.5 percent from downtown and is making 3.0 threes per game, which both lead the team.

Despite McHale's praise of Thornton' s on-ball work, he's still not an overall great defender and probably never will be — he's been a negative player on that side of the ball for his career and is again this season — but as long he keeps jumping lanes for the occasional steal and utilizing his veteran savvy and strength to guard guys down low, he'll bring enough to the table on the defensive side to make his current production invaluable.

Whether or not Thornton can sustain that production moving forward, especially with the pending return of several main rotational players, is the main question. Donatas Motiejunas will return from back surgery at some point this season, and the Houston Chronicle is reporting that Terrence Jones returned to practice this week and is expected to play in Wednesday's home game against the Nets.

But Thornton's play and the chemistry he's shown in the starting five has McHale sounding non-committal to how much Jones will eat into Thornton's time, as he told the Chronicles' Jose de Jesus Ortiz:

"Terrence has missed a lot of time with us... He's just got to get himself into great shape so he can go out there and help us."

For his part, Thornton doesn't seem too worried about how things are going to shake out and looks like he's just enjoying his time playing with Harden and Howard and for McHale, telling Feigen:

"It's been great. It's been a long time since I've been in an offense with coaches that have the ultimate confidence in you. When a coach has the ultimate confidence in you, it's easy to go out there and play and let the chips fall where they may. If you mess up, get back, get it again. It's great when you have guys who share the ball too. It's fun.

"When you have Dwight and James, I'm standing out there getting open shots. Sometimes it's crazy, I'm like, 'Damn, I'm so wide open.'" It's on me to step up and knock down the shot.

"...If you break the defense down, you have lob targets like Dwight waiting to see the lob. You can throw it anywhere. It makes it easy on you."

Thornton has shown he can still contribute in the NBA, and he's also shown he knows how to play along the Rockets' two superstars. It's now on McHale to keep him integrated as the rest of the team gets healthier. But as Thornton continue to prove he brings more to the team than just his shooting, that versatility should surely have him on the floor in Houston this year for the foreseeable future.