The Rockets have to bench Corey Brewer

We haven't given up on him. But something's got to give.

Share All sharing options for: The Rockets have to bench Corey Brewer

The Rockets very well could have lost to the Philadelphia 76ers yesterday. I watched the game. The turnovers and fouls committed in the second half were endlessly frustrating, culminating in Corey Brewer fouling Hollis Thompson shooting a three-pointer with 6.2 seconds left in a four-point game. It was Brewer's sixth foul of the game.

Most of those other fouls on Brewer were dumb fouls as a result of guards like T.J. McConnell — not fleet of foot and giving up about 7 inches to the lengthy forward — torching him in half-court, one-on-one situations. On the other end of the court, he shot one time from the field (a made corner three), had no assists and two turnovers. He played 22 minutes off the bench. K.J. McDaniels, recalled from RGV and active, remained plastered to the bench.

Brew finished as a –9. On the year, lineups with him on the court are scoring 16 fewer points per 100 possessions than those without him. The defense is giving up another point more with him, leading to a net rating of –17.2 (per basketball-reference). He's leading the team in minutes off the bench (a hard stat to calculate considering the amount of different starting lineups the Rockets have used so far).

The Rockets bench is a huge problem 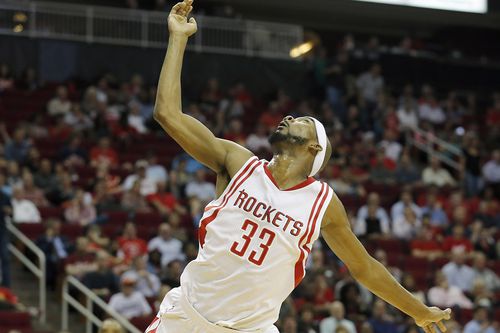 Brewer's unit has been killing Houston

The seven most-used, four-man lineup combinations he's been a part of all have negative net ratings. When he shares the court with James Harden and Ty Lawson (basically all three penetrators playing at once), the Rocekts are being outscored by 40 points per 100 possessions. The Rockets are getting outscored by more than 20 points per 100 when Brewer shares the court with one of Harden and Lawson.

With the exception of locking him in a lineup alongside Jason Terry (who spaces the floor for Brewer to slash), every lineup Brewer has played in so far this year hasn't just been bad, it's been abysmal.

And yet, he continues to get played heavy minutes, particularly down the stretch of games, when the Rockets' second-most impactful player so far this year, Clint Capela, finds himself on the bench more often than not.

The question that comes to mind is: why? Why have the Rockets experimented with everything but benching Brewer? Marcus Thornton has started. Terrence Jones has flip-flopped from starter to bench hand to starter and back to bench hand. Trevor Ariza has played as much power forward as he has small forward. Clint Capela is in the starting lineup a month after the Rockets declared he and Howard next to each other would ruin the team's spacing. Jason Terry has started with Ty Lawson healthy, even.

The one constant amid all that turnover: Corey Brewer, getting about 20 minutes off the bench, and actively harming the Rockets. I know it's oversimplifying it to look at Brew's -17.2 net rating and think how many of those games the Rockets would have won with anyone else taking those minutes. But you have to think the answer is at least one or two.

The obvious answer to who should get Brewer's minutes is K.J. McDaniels. I wrote when McDaniels got sent down to RGV that it was a waste to at least not give him a shot since Brewer has struggled. Yes, playing in the Valley would give him needed on-court minutes, but the Rockets might need him now.

More: K.J. McDaniels should have been given a chance before demotion

Since then? McDaniels has been called back up because of nagging injuries to Patrick Beverley and others. Guess what? Brewer has still been terrible, and McDaniels has not seen the court. The biggest gripe with McDaniels? He can't shoot. Well Brewer has a 29.7 shooting percentage total. Less than 30 percent on all shots! That's crazy, historically bad. You're telling me McDaniels can't do that plus block some shots that start a fast break?

But, at this point, it's useless to make this argument. The Rockets — whether it's Kevin McHale or J.B. Bickerstaff at the helm — clearly are determined to not give McDaniels minutes. Whatever. But to continue to play Brewer so much instead of trotting out more two-big lineups or two-point lineups is a fool's errand. Until he gets his head right, he should not be taking his warmups off.