A team-wide regression suggests last year was the high crest of the squad as it's currently constructed.

Share All sharing options for: This group of Rockets peaked last year

There's an old cliché in sports that goes: you are what your record says you are. Clichés exist because they carry a specific element of truth that's lasted for a long time.

It doesn't matter how many "What if?" games you play. Eventually, your failures — the flubbed defensive rotation late in the game here, the errant fourth-quarter jumper there — all begin to add up and become more than just missed opportunities for an otherwise talented team.

Let them happen often enough, and you can no longer rest on past laurels, reputation or potential. Those failures and mistakes begin to redefine who you are as a team, and the past slowly drifts away into fond memory and gradually dissipates into just that: The past.

Take these Houston Rockets, who came into this NBA season almost universally lauded as a potential title contender and a virtual lock for 50-plus wins and a high playoff seed. They were a 56-win outfit the season before, and the team lost only a few minor bench players in the offseason turnover.

Meanwhile, they gained a top point guard in Ty Lawson, and were also expected to easily reintegrate the injured ones of their own in Patrick Beverley and Donatas Motiejunas, making them one of the deepest, most versatile rosters in the entire NBA.

Harden is the Rockets' 'core problem' 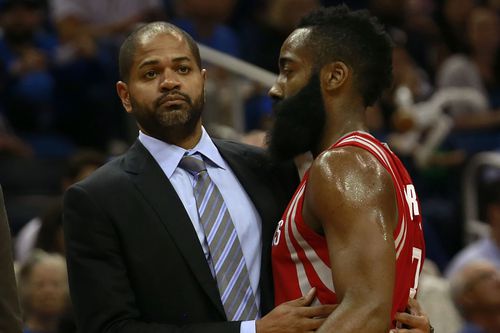 Bickerstaff says the Rockets core problem needs fixing. It starts with the Beard.

But a funny thing happened on the glittering road to more postseason success that no one really saw coming: this core version of the Houston Rockets peaked last season.

Sure, the bottom hasn't completely fallen out yet. This team is too talented to lose consistently, night-in and night-out, but the problem is they're not talented enough anymore to win night-in, night-out either.

Last year's squad didn't suffer their 17th loss of the season until Feb. 11 in their 53rd game, while this year's merry band of underachievers managed that same 17-loss feat before the new year.

The root cause is that there's been almost universal regression occurring among dang near every significant member of the Houston rotation.

Sure, James Harden is averaging a career-high 28.4 points per game, but he's also shooting more, taking almost an additional two shots per game. Combine the added chucking with shooting percentages that have dropped both from the field (44.0 percent to 41.6 percent) and from deep (37.5 to 33.8) and you have a much less efficient player than the version of the Beard we saw last year.

He's also turning the ball over at a much higher rate this season, averaging 4.5 per game, up from 4.0 last year, and sporting a 15.6 turnover percentage, which is the highest of his career.

Harden's been particularly bad on the defensive side of the ball. After a competent year of defending last season, we've seen the return of James The Bearded Bull Fighter, as he's regularly played the "Olé" game with opposing guards and generally looked disinterested or incapable of defending with top effort.

The mythos of prime Howard's paint patrol has slowly morphed into more yesterday than today, along with Howard's athleticism and past physical dominance.

Alongside superstar one, Dwight Howard's struggles have also been well-documented this season, with his points per game and shots per game at their lowest point since his rookie season.

Howard's defense hasn't been downright terrible like Harden's, and though his blocks are up this year over last, he does seem to be affecting fewer shots than ever these days. Opponents rarely seem terrified of taking the ball right at Dwight and are doing so much more than ever before.

The Rockets give up a league-high 46.7 points in the paint per game. The mythos of prime Howard's paint patrol has slowly morphed into more yesterday than today, along with Howard's athleticism and past physical dominance.

And it's not just the superstars. The role players are struggling too.

Trevor Ariza's counting stats are down across the board. His shooting percentage of 38.7 percent is the worst of his career, and even his much vaunted defense has been no better than average this season. It's one of the worst overall defensive campaigns we've seen from Ariza.

Trevor is 30 and playing in his 12th NBA season. The beginning of a permanent slide is not out of the question.

Patrick Beverley's never been confused for an offensive playmaker, so it's no real surprise then that his counting stats are down, as his minutes have dropped drastically this year as compared to season's past. But his per 36 offensive averages are relatively on par with what we're used to seeing from Pat.

Where Beverley has plummeted badly, however, has been on defense. Notice a theme here?

The normally reliable Beverley is struggling through the worst defensive season of his career, sporting a negative defensive plus-minus (-1.1) for the first time in his four NBA seasons. Beverley is on this team for his D and his ability to affect the game as a point guard without the ball in his hand.

If that's not effective anymore, where's his place on this team moving forward?

Corey Brewer's quagmire certainly needs no introduction here at TDS. Despite a few small flashes, he's mucking through a nightmarish season of ineffectiveness on both sides of the ball. His scoring (6.7 points per game) is the worst since his rookie season and his shooting percentage (33.6 percent) is the lowest it's ever been, and like the others, he's been a total black hole on defense.

Brewer will be 30 in March and is in his ninth NBA season and has never been known as the type of technician who can still succeed once his athletic prowess begins to fade. That fade very well may be happening right now.

But it continues to get worse.

Terrence Jones has been a negative defensive player this season and seems stuck in the mud most nights, as are Lawson, Motiejunas, Jason Terry and Marcus Thornton. It's very possible not a single one of them is on the Rockets opening day roster next season.

Suddenly, a group that looked stacked heading into the beginning of the year doesn't have a sure thing among them. Long term, each and every one of these players is currently a major question mark.

Will Harden ever grow into the type of leader this team needs? Howard claims he wants to play 10 more seasons, but looks like he'll be lucky to finish another four. Ariza and Brewer may have already hit their high-water marks.

Jones has showed minimal improvement over his four NBA seasons, Motiejunas is still struggling to regain form after back surgery and has mostly looked awful, Terry could retire at a moment's notice, Lawson's looked a shell of the player he was in Denver, while Thornton has been, like always, streaky. And to top it off, he's now unhappy with his minutes. He didn't play at all in the loss to the Hawks.

In fact, the only player on the entire roster currently on an upward trajectory has been Clint Capela, who's improved in most counting and analytical categories this season and has, at times, looked like a stud in the making.

This team-wide individual malaise has effected the entire squad performance greatly, especially on the defensive side of things. The Rockets have fallen off in both opponents points per game and field goal percentage. They've dropped from 103.4 points per 100 possessions last season, which was 8th in the NBA, to 107.1 this season, down to 24th. The 44.3 percent shooting they gave up last year was good for 12th, which has dropped to 46.2 percent or 25th in the NBA, this year.

After a slow offensive start to the year, the Rockets have begun to right the ship in that regard, putting up similar offensive point per game numbers and shooting as last year, but the regression on defense has just been too much for them to overcome.

When practically the entire team has gotten worse since last year, and with the defense in particular is looking like a group of has-beens and never-weres, it's fair to question whether we've seen the best this group of Rockets had to offer. Unfortunately for us in 2016, it looks like May 17th, 2015 against the Clippers was that peak.

With the season 40 percent over, the team now under .500 and finally facing the real meat of the schedule, nothing short of one of the most dramatic turnarounds in recent league history can save this current Rockets construction. Otherwise, this team looks very different next year, with Harden and Capela the only true roster guarantees. It's open season on anyone else.

If only the way down was as much fun as the journey up.