Rockets trade deadline 2015: Who are the Rockets' movable players?

Rockets GM Daryl Morey is always itching to make a deal. Who might be involved in talks?

Share All sharing options for: Rockets trade deadline 2015: Who are the Rockets' movable players?

Over the past eight years, it's hard to think of a more active general manager in the NBA than Daryl Morey.

Last year, he traded Aaron Brooks for Jordan Hamilton close to the deadline. In retrospect, not the most brilliant move, although Hamilton had a decent stretch upon his arrival. Hopefully any move the Rockets make this year will be of more consequence.

Like always, the Rockets have remained flexible for a deal because Morey always wants a pathway to improve the team. Expiring contracts, draft picks and young, cheap players are all trade assets to varying degrees -- NBA nerds' official scribe, Zach Lowe, continues to remind us how valueless expiring contracts are becoming -- and the Rockets have plenty of all of them.

Last year, in March and April, he averaged about 14 points and 6.6 rebounds per game, posting terrific offensive efficiency numbers: he had a 133 offensive rating in 14 games of March 2014. James Harden, the NBA's premier offensive force, has a 119 offensive rating this year.

Then the playoffs, and LaMarcus Aldridge, happened. Jones was eaten alive by the perennial All-Star and the then-22-year-old's defensive flaws were exposed. He did plenty of work over the summer to improve all aspects of his game, including trying to stretch his solid midrange jumper out to the three-point line. It has thus far not meant much -- he suffered a serious nerve injury four games into the year and hasn't been able to regularly see the floor since.

Jones is owed $2.5 million next year, and would be a restricted free agent after that. He's easily the Rockets' most valuable, tradable player commodity. A first-round pick is nice, but not as nice as someone who has already proven he can start and positively contribute to a Western Conference playoff team.

It's unclear how many calls Morey has either fielded or made regarding the Kentucky product. Adrian Wojnarowski's second-most used phrase after "league sources tell Yahoo! Sports" is "the Houston Rockets also have interest." It's unlikely the Rockets are making any deal without their trade partner sniffing around Jones, and seeing how much it would take to get him.

Not much to say about this one: The Rockets get the pick if it falls between 4 and 19, which it almost certainly will. The Rockets are in win-now mode. A pick that would net the equivalent of a rookie Jeremy Lamb or Marcus Morris is not nearly as valuable in Houston as it is in, say, Phoenix. The Suns' Isaiah Thomas, Alex Len, Eric Bledsoe and the Morris twins is a much younger, longer-term core than anything surrounding Dwight Howard.

Any discussions the Rockets have with teams looking to deal players that can help will begin with this pick. If the Rockets still possess it on Feb. 20 it will be both a surprise and a minor disappointment.

Although Big Papa has turned into something of a darling among Rockets fans, he's clearly someone who could be moved if the right deal presented itself. He has a team option for next year at just around $5 million, meaning he's basically a sizable, but movable, expiring contract.

Papanikolaou can throw some dazzling passes, but the overall package just hasn't added up at this point in his NBA career. The Rockets are 8.6 points worse with him on the court, per basketball-reference, and considering Papanikolaou spends well over half of his on-court time with James Harden, that's bad.

Big Papa is shooting 30.1 percent from distance this year, a nearly unacceptable number in the Rockets gunning-for-threes offense, and he's shooting just 35.6 percent from the field. At this point, it's still too early in his NBA career to just call him a bad shooter, but he's not getting more confident in his shot anytime soon.

The Greek is just 24, so he's got time to mature, even if he's not a raw, Motiejunas-type prospect. He's a restricted free agent after 2016, so he's theoretically under team control for quite a while. The Rockets could lose Corey Brewer and Josh Smith this offseason -- both will be unrestricted free agents -- and Big Papa would at least be security at the wing in case neither return.

But depth at small forward for 2015-2016 is not something that would make Morey hesitate for a second to get a deal done before 2 p.m. CT Thursday. Big Papa is a trade asset right now, and could easily be included to match salaries in a Goran Dragic deal or if the Rockets want to be a part of a three-team trade.

These guys are the salary filler. Yes, Jason Terry is a valuable locker room presence and Shved, when healthy, is capable of some nice basketball things. But I have an incredibly hard time seeing Morey turn a deal down because either one of these guys are included in a package.

Terry is a $5.8 million expiring contract, while Shved -- who can't be dealt until the 19th -- makes $3.2 million this year. Those are numbers big enough to counterbalance a guy making a good bit of money this year, and considering the Rockets are hard up near the salary cap, that's crucial.

These guys don't have real trade value outside of salary matching. A scenario I could see is Shved getting shipped off in a three-team deal where the Rockets receive a future or conditional second-round pick in return, but Morey might see Rockets production in his future. Terry would probably need to be included in a real trade for Morey to part with him; McHale obviously loves him, and Morey and McHale have a good relationship. 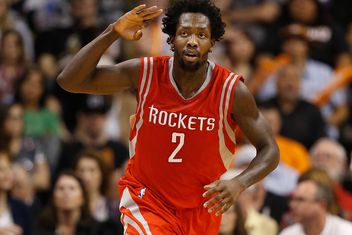 No one saw this one coming

I know what you're thinking: "how could the Rockets trade away the most skilled player in the NBA?" Well, hear me out.

Anyone who has watched the Rockets this year can see that, outside of a healthy Dwight Howard, point guard is the team's biggest need. Beverley is the Rockets' starting point guard, and he's the best on their roster. If they were to trade for a better PG, a team might request Beverley in return. In fact, CBS Sports' Ken Berger said Beverley is the main piece in the Rockets' offer for Dragic.

That makes little sense, because Beverley will be a free agent this summer. The Suns might take Beverley and a first-round pick and try to go for the playoffs anyway, if there are no better offers out there. But it's unlikely, I think, Beverley goes anywhere.

Don't panic. I can't see Donuts getting included in anything other than a blockbuster offer for, say, Ty Lawson (which folks shouldn't rule out). He's probably the third-most untouchable asset the Rockets have, after Harden and Howard. He makes $1.5 million this year and $2.3 million next year. His next contract should be incredibly interesting, especially with the salary cap set to increase. He's a bona fide trump card asset in this trade season, but I don't think the Rockets will pull the trigger, considering Howard's health issues.