This was Houston's first loss of the season when Harden scores 40 points or more.

The Portland Trailblazers were simply too big and too dominant tonight for the undermanned Houston Rockets to come away with the win.

Even though Houston wanted this one.

Harden, like always, was superb at getting to the free-throw line. He's become one of the best in the league at reading his man -- he always knows when it's the perfect time to draw the foul, and tonight was no different. Several times he caught the defender, usually Wesley Matthews, with his hands outstretched horizontally rather than vertical; This is when he would make contact with the defender's hands as he went up for a jump shot, drawing the foul almost every time.

Harden had 20 points after two quarters and put his game into overdrive for the second half. He got his teammates involved on the offensive end, put in work on defense and found his way to the rim whenever he saw the slightest opening.

The Beard went to the line 23 times and converted on 19 of them, while the rest of the Rockets combined for 4-of-11 from the charity stripe. Donatas Motiejunas went one-for-seven and was a shell of himself for most of the game.

D-Mo struggled against the length of Portland, particularly LaMarcus Aldridge and Robin Lopez, who were able to take away some of his go-to moves because they were too big to shoot over. As the game went on, his confidence in his shooting worsened. To start the second half, Harden tried to get Motiejunas involved in the offense, but the big man remained apprehensive to post up (his poor free-throw shooting was probably also a factor).

Houston went on a 10-2 run midway through the third quarter and looked ready to take the lead.

Josh Smith tied his career high in three-pointers made, shooting four-of-seven from deep. He helped bring the energy for Houston and performed well as a point-forward. He is an underrated dribbler -- even though he dribbles very high and looks extremely reckless when he leads a fast break -- and he is adept at slicing through the lane at top speed while maintaing the court vision to find the open man when help defense comes. He even has a move or two on the block and can finish at the rim with the soft touch or get the assist under the basket by getting the help defender stuck in the air or sucking in the exterior defense then kicking it out to a shooter.

The Rockets were having Harden be the help defender against Aldridge on the block. Kevin McHale seemed confident in double teaming LA because of the defensive prowess of Ariza and Brewer, who were relied upon to rotate around the perimeter and be able to cover three players. Also, Brewer and Ariza are quick and know to keep their arms up as they rotate around the perimeter to disrupt the passing lanes, often resulting in a steal.

Giving thanks for Corey Brewer 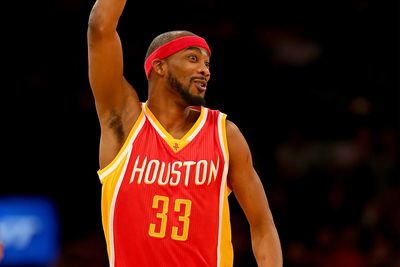 The swingman may have been the Rockets' best acquisition this year

Brewer, who always brings energy on defense, was also bringing it on the offensive end tonight. He was able to get to the rim with relative ease, similar to Harden, but unfortunately couldn't convert at the basket. Still, his aggressiveness and assertiveness is a major positive. Honestly, he may have been a better pickup then Smith, primarily because every Western Conference team needs an elite perimeter defender because there are so many high caliber guards in the playoff race.

Combined with Ariza and Patrick Beverley, the Rockets have excellent perimeter defenders, which will be huge come playoff time.

Rockets battle from 17 down to take a brief 2pt 4th Q lead but could not close things out. Blazers win 109-98. Gone is the 4 game home W stk

The energy Houston brought in the second half needs to be there all game. This group has gotten into a bad habit of playing noticeably more lackadaisical to start games compared to how they finish them, and it could really wind up hurting them, especially come playoff time.

Houston will face Portland again March 11 for the tiebreaker.

*By the way, was anyone else impressed by how quickly Brewer slipped his shoe back on in the middle of gameplay?