The Rockets power forward has been vastly improved on both ends since returning from injury.

Share All sharing options for: It's almost time to re-evaluate Terrence Jones' ceiling

It's almost hard to believe what we have seen out of Terrence Jones over the last two weeks.

Consider this: since Feb. 20, he's averaging 9.6 rebounds and 2.4 blocks per game, scoring 14.5 points, a number slightly depressed by the 7 points he put up in altitude on the second night of a back-to-back on Saturday night (the thin Denver air can get the best of anyone).

On the season -- taking into account he was working his way back into shape for five or six games, the Rockets are 5 oints better offensively and 3 points better defensively when Jones is on the floor, according to B-R. That's significant because he's been part of killer lineups with Josh Smith and Corey Brewer on the floor and James Harden on the bench.

Yes, Terrence Jones is good enough to carry lineups with no James Harden. Or at least, he has been of late.

Read this from Jesus Gomez at SB Nation. Read the whole article, but here's a good snippet:

While his bounce and length allow him to force misses at the rim at a better rate than Roy Hibbert, his speed makes him tough to get past even for perimeter players [...] Synergy Sports Technology ranks him in the 90th percentile defending the pick and roll. Overall, players shoot 8.3 percentage points worse when Jones is defending them this season. He has been great on that side of the ball.

This version of Terrence Jones has physically overpowered people, then shot past them with his athleticism. He's undersized for a traditional power forward, but he's always had long arms. The more we learn from the treasure troves of fun data surrounding the NBA, the importance of length over height becomes clearer and clearer.

The Starters née The Basketball Jones mentioned this on their Friday show, but he's significantly stronger this year than in years past. He used the time from his leg to work on his upper body, because guys are bouncing off of him. His offensive rebounding rate is very good at 7.8 percent but it's the way he gets some of those boards that are just absurd, flying into traffic and snatching them from the sky.

Terrence Jones is back 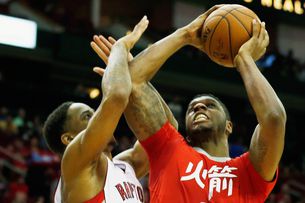 Two questions linger: how long will this last, and what will happen when Dwight Howard comes back?

The first question is impossible to know. Is this a true shift in Jones' basketball identity, one in which he goes from hustle guy who struggles to match up with the league's best power forwards to one of the league's better big men?Recall those numbers he's amassed since playing 30 minutes per game: 14.5 points, 9.6 rebounds and 2.4 blocks.

Only two players have put up those numbers over the course of this season: Pau Gasol and Anthony Davis. To be fair, Gasol has averaged 18-12-2 while Davis is at 21-10-3 so Jones isn't quite at their level yet. Also Gasol might be a terrible fit for the Bulls despite his counting stats, but I digress.

If this is the new, improved Terrence Jones, this is an All-Star (Al Horford: 15.8 points, 7.3 rebounds at the All-Star Break). He's cheap through next year and by then the cap will go up to the point where Daryl Morey should have no trouble re-signing him.

Does he mix with Dwight Howard? Well, in the four games they played together at the beginning of the year, the Rockets went 4-0. Beyond that, we have last year as evidence, when the Rockets won basically as much as they have this year, but flamed out in the playoffs partially because Jones got dominated by LaMarcus Aldridge to the point where he had to be benched.

He seems to have figured out his defensive problems. He mixes so well with Donatas Motiejunas partially because they are both somewhat of a threat from distance, Donuts more so (he's up to 36.6 percent from three-point range this year. Jones is at 31.8 percent). Howard must remain in the paint outside of a pick-and-roll on offense, so Jones might not be as effective.

But defensively, hoo boy do the Rockets have potential. Jones, Howard and Josh Smith are all capable of blocking two shots per game with enough minutes. Their length, timing and leaping ability (plus Jones and Smith's left-handedness, always a sneaky advantage) makes it brutal for smaller players to get a shot off near the rim against the Rockets.

It's too soon to make a verdict on this, but Terrence Jones might have more potential than even the most hardcore fans fully realized. He's only in his third year in the league. Big men always take longer to develop. The athleticism is real, as is his motor and touch around the basket. All he needed to add was strength and consistency.

We repeat: he's playing like an All-Star right now.

Those who have summarily dismissed the Rockets from championship contention because they "don't have enough outside of James Harden and Dwight Howard" could need to re-evaluate soon. The Rockets are more talented than we thought, and Terrence Jones is the reason why.