James Harden isn't the only Rocket who should win an award

There are cases to made for three other members of the Rockets organization.

Share All sharing options for: James Harden isn't the only Rocket who should win an award

James Harden should win the MVP this year, but his pursuit of the NBA's premier award has distracted us from the outstanding performance of some other members of the Rockets organization.

In fact, the Rockets have three other guys who should be in the conversation for some postseason awards: Daryl Morey, Kevin McHale and Corey Brewer.

I don't think all three of these guys should win Executive, Coach and Sixth Man of the Year, respectively. But they all should receive votes, they all should be discussed at length, and hopefully one of them takes home some hardware. Let's break down their cases.

Daryl Morey for Executive of the Year

The Rockets' roster today looks very dissimilar to what it did when the season started, and is completely different from the one that lost to the Portland Trail Blazers last year. I don't know when a GM stops getting credit for past moves in consideration of this yearly award -- every GM operates on a long-term plan, so evaluating their season based only on what they've done since July 1 seems like a fool's errand.

Not only did he bet on Harden's ascension, but he also surrounded his two superstars with absolutely astounding depth; enough to weather the onslaught of injuries this year. Every player on the team has contributed winning basketball. Yes, the Joey Dorsey signing was probably a mistake, considering Tarik Black had to be sacrificed to sign Josh Smith and is a demonstrably better basketball player. If it weren't for Dorsey's contract, Black would still be a Rocket and Dorsey would be ballin' with Starbury in China right now. 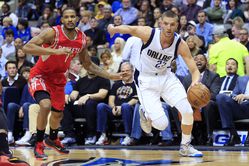 Morey put together a winning roster that's strong top to bottom, and it's malleable and flexible, just how he likes it. At the deadline, the Rockets only acquired Pablo Prigioni and K.J. McDaniels. But they had options, with movable parts in Jones, Motiejunas, Alexey Shved, Isaiah Canaan and the Pelicans' first round pick. They don't have a ton of cap space, but they have a lot of ways to make a move.

I can't find anyone seriously talking about the Executive of the Year race, so I can't say for sure who the favorites are, but you'd have to think Cleveland's David Griffin, Golden State's Bob Myers are up there.

Griffin lured LeBron James, traded for Kevin Love and executed season-saving trades for Timofey Mozgov, Iman Shumpert and J.R. Smith (not to mention getting rid of Dion Waiters). The Warriors have the best record in the league and their roster is very deep, so Myers is probably the frontrunner.

But where would the Warriors be if one of Stephen Curry, Klay Thompson, Draymond Green or Andrew Bogut missed some serious time. Better yet, how about two of them? Marreese Speights did some crazy things for a while. They might be fine, but they've never had to entertain that hypothetical.

Morey's roster endured more injuries than any other contending team. And yet, the Rockets have one of the best records in the league, and much of it is due to Morey's genius. He's my pick for the award.

Kevin McHale for Coach of the Year

Let's get this out of the way: Kevin McHale is not winning this award. The candidates are Steve Kerr and Mike Budenholzer, that's who the popular narrative has decided will win, and there's no stopping this train.

And, let's be honest, they're great picks. The Warriors are having one of the greatest seasons of all time with a team that's not that different from last year's squad. The Hawks are doing better than even the most wild of prognosticators would have predicted, and so much of that is from Budenholzer's pace-and-space system he honed in San Antonio under Gregg Popovich.

Old school guys lament the death of the midrange game. McHale has happily danced on its grave

But, my word, has McHale coached his ass off this year. The Rockets just won their 50th game with eight to go. More than half of those games have been without their starting power forward. More than a third have been without their starting 4 and 5. McHale has taken Moreyball and got every single player on the roster to buy in, and we're seeing the results.

This is an underrated part of what McHale has been able to do. Moreyball -- threes, layups and free throws -- is still a radical notion for many within the game. Old school guys lament the death of the midrange game. McHale has happily danced on its grave, despite being one of the champions of the old heads.

He took midseason acquisitions Corey Brewer and Josh Smith -- thought to be questionable fits because of their lack of any deep-shooting acumen -- and got their very best basketball, rejuvenating Smith's career and taking Brewer's to new heights.

McHale has ridden James Harden into the ground, sure, but he didn't have a choice. We can nitpick about Canaan, Johnson and McDaniels' lack of minutes, but McHale has said all along he loves his 8-9 man rotation, and there's been no griping around the organization around this particular philosophy.

No matter who those nine guys are, McHale has made it work. Think about this: the Rockets have had 42 different five-man lineups play at least 20 minutes together, according to NBA.com. Only four of those lineups have played 100 minutes or more together. The Rockets' most-used lineup, Bev-Beard-Ariza-Donuts-Dwight, has played 360 minutes together.

The Hawks have only had 29 five-man lineups play 20 minutes or more together, and their starting five has played a whopping 891 minutes together. The Warriors' starting five has played 727 minutes together, and they've had 35 different lineups share the court for 20 minutes, but no team has been in more blowouts than the Warriors. If they had played as many close games as the Rockets, bet that number would be smaller.

The ultimate referendum on Kevin McHale's actual coaching abilities begins in three weeks. He was thoroughly outcoached by Terry Stotts last year -- a great coach in his own right -- and he has to improve this year. The Rockets' late-game execution against the Raptors Monday night didn't do a whole lot to inspire confidence, but this whole season has given me hope that McHale has improved.

Corey Brewer for Sixth Man of the Year

Where do I begin in professing my love for my favorite non-Harden 2015 Houston Rocket? How about here:

That's right: Corey Brewer is the best fast-break player in the league, full stop. Give Corey Brewer the ball on the break, and he scores the same amount of points as Draymond Green does with two free throws. Mindblowing stuff.

It goes beyond that. He's seventh in the league in steal percentage, so he creates a ton of those brilliantly executed fast breaks. Whether it's dishing, finishing ridiculous layup attempts or making the wise decision to pull the ball back out (rarely), Brewer is a wizard in transition and is a delight to watch.

Let's do a comparison, acknowledging that Isaiah Thomas, Marreese Speights and Lou Williams are Brewer's main competition, and just taking Brewer's numbers on the Rockets because the Timberwolves suck:

Brewer is worse than the competition, statistically speaking. But to look only at the statistics is to completely ignore what makes Brewer special. Furthermore, he's not that much worse.

What is a sixth man if not a sparkplug off the bench? None of those guys fills those roles as beautifully as Corey Brewer. When you consider his flexibility -- spelling Trevor Ariza, filling in at SG when Harden runs point, filling it at SF when Ariza is a small-ball PF -- his infectious enthusiasm, and just how important he is to everything the Rockets do off the bench, it begins to outweigh the numbers.

Plus, if wins count for every other award, why not 6MOY? Thomas was run out of Phoenix because everyone hated playing with him and the Celtics haven't been much better since he arrived. The Raptors are the fourth seed in the East and Williams is a laughable defender. Speights gets 16 minutes a game and his numbers are inflated by a bonkers start to the season when he was leading the league in PER.

Brewer is the most impactful bench player on a team that might finish No. 2 in a loaded bench conference. Does he have a bulletproof case? Of course not.

But goddammit, Corey Brewer should be the Sixth Man of the Year.