The elder statesman is actually a great fit for these Rockets.

Share All sharing options for: Jason Terry's the starting point guard, and that's a good thing

With Patrick Beverley out for the season, the Rockets will be depending on Jason Terry's experience and wisdom (and shooting) to carry them through the playoffs. To some, that might be a scary proposition, but not to the man himself. And that's one of the reasons it could actually work.

Jason Terry, as you already know, is the designated veteran on the Houston Rockets. He's 37, and while Pablo Prigioni took the "oldest Rocket" title from him at the trade deadline, the Argentinian is a relative newcomer to the NBA. JET's been in the league since 1999. He's also one of only two Rockets with an NBA ring, Trevor Ariza being the other.

Let's be clear: the Houston Rockets are not a group of young guns lacking experience -- both James Harden and Dwight Howard have made it to the NBA Finals on other teams -- but Jason Terry isn't just an older player who's been to the playoffs. In his brief time on the Rockets, Terry has been vocal in the locker room, with reporters (we know) and with teammates (we assume). That's what Rockets fans expected from him this season -- what they didn't expect was how vital he'd be to the Rockets' on-court success.

After Daryl Morey's two brilliant December acquisitions, Corey Brewer and Josh Smith, arrived, Terry combined with them to form the #HeadbandOfBrothers, one of the most fearsome bench units in the league. Then everyone got even more injured, and JET was pressed into starting duty.

If one had to pick any reserve to step up, however, Terry would be the choice. Brewer's amazing, but he can't share the floor with Harden and Ariza if the Rockets want to have any size at all. Josh Smith has been a disaster in the starting lineup, and I have a sneaking suspicion it's because James Harden is so amazing at getting him open threes that he drifts out to wait for them more. No one else is skilled enough to step up. But why does Terry fit?

The Rockets' other award candidates 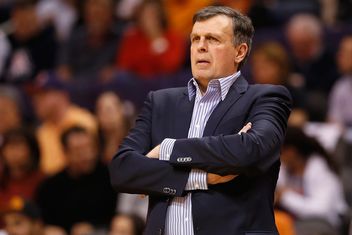 Show some love for Morey, McHale and Brewer

First of all, Terry's the best outside shooter on the Rockets. He doesn't have the legs to shoot all night any more, but his 39 percent does lead the team (Dwight's 50 percent doesn't count, BRef nerds). More importantly, he has the experience to handle not being the first, second or even third scoring option on the floor. He doesn't need the ball in his hands to get a rhythm, and he's always ready no matter how long it's been since his last shot.

Crucially, the entire NBA knows what a threat Terry is from three. His man can't drift off of him to help in the lane as much as they could for Pat Beverley, which opens up Harden's drives and post-ups for Dwight Howard, Donatas Motiejunas, Josh Smith and Terrence Jones.

Secondly, JET may not be a true point guard in the ideal, CP3 sense, since James Harden handles primary ball-handler duties, but he is a skilled passer on the fast break and on the interior. Check out his two assists against the Wizards on Sunday -- both passes to cutting big men for easy shots at the rim. Anecdotally, I've noticed that this part of a guard's repertoire is noticeably absent from Patrick Beverley's game.

That might be the most important factor in Jason Terry's fit with the Rockets, because three of their top four big men -- Dwight, T-Jones and Smoove -- are all at their most efficient when cutting to the basket, where they can use their strength and athletic ability to finish. I'd actually argue that Donatas Motiejunas is better paired with Beverley, since he's at his best either posting up or spotting up from three, which are the simpler passes that Pat can handle.

Obviously, JET is nowhere near the defender that Beverley would have been, and the West is filled with point guards that will punish him. But I had had my doubts about Beverley's defense earlier in the season anyway, and a healthy Dwight could cover up for enough of Terry's shortcomings that the balance might still be a positive one -- especially with the benefits of having a steady hand in pressure situations.

So, while the injury bug has bitten the Rockets hard this year, the full front court has a decent shot at being intact (and four-deep with impact players) in time for the playoffs. That's very encouraging. Nearly as encouraging is the fact that Patrick Beverley, the one Rocket who will definitely miss the playoffs, might not be missed all that much.

Now let's all pretend we're airplanes and fly high with the JET.