Ed. Note: When we started the season recap series two weeks ago, it was our intention to recap the seasons of current Rockets. As it happens, of all the recaps we've written so far, only Clint Capela is still on the squad. From here on out, we'll be able to look forward to next year's Rockets team. But we couldn't leave off Smoove. So here you go.

The Houston Rockets signed Josh Smith on Christmas Eve this past season, a controversial move at the time considering he had just been paid $26 million by the Pistons to go away and the Rockets were playing well at the time. When posed the question of "should the Rockets sign Josh Smith?" I said "I'd categorize myself as a 'soft no.'"

Boy, was I wrong.

For five months, J-Smoove was, for the most part, a stabilizing force off the bench, especially when Donatas Motiejunas went down. Per 36 minutes during the regular season, he scored 16.9 points and grabbed 8.4 rebounds, both better than the numbers he posted in 28 games for the Pistons. His assists, blocks and steals all were down from his Detroit days, but the biggest different came in his shooting.

When the Pistons cut Smoove, ESPN Stats and Info sent out a series of tweets laying bare the fact that since, he had signed in Detroit, he was the worst shooter in the league by almost every measure:

Josh Smith was on pace to be the 1st NBA player ever to shoot below 40% FG & below 50% FT while taking at least 12 shots per game.

But none of us really considered Josh a stabilizing force when he was out there. He threw wild, errant passes. The shots he took were frequently like nails on a chalkboard. Sure, his shooting was better than it had been, but those numbers are not good. And yet, the Rockets were four points per 100 possessions better offensively with him on the court, and three points per possession better defensively. The team shared the ball better, turned it over less and played better defense.

In the playoffs, the reason the Rockets cut Tarik Black and gave him $2 million became quite clear. The entire Rockets team struggled offensively, which sounds weird because, you know, they were three wins away from the NBA Finals. But when Smoove was on the court, the team had a 110.2 offensive rating, a full six points better than when he sat. It's hard to tell how much of that was due to The Disappearance of Terrence Jones — Smoove started the final eight games of the playoffs because Jones was such a disaster — but Smith was nonetheless excellent.

What will the Rockets do without Josh Smith? 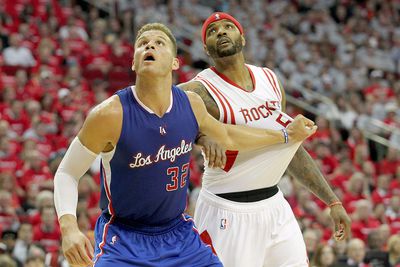 Smoove is moving on. Here's what the Rockets do next.

He shot 38 percent from deep in the playoffs. The player with the lowest three-point percentage of anyone with more than 1,000 attempts in NBA history morphed into a well above-average shooter in the spring. It was never more important than in Game 6 of the Western Conference semifinals, when the Rockets were down double-digits and he hit three three-pointers in the fourth quarter and led the Houston comeback that turned the season from a moderate success to a ringing one.

Against the Warriors, he played OK. The entirety of the Rockets were kind of a mess. I don't begrudge him or anyone, they faced a freight train of a team and were far from full strength. He dropped 20-6-5 (and missed nine free throws) in the Rockets' lone win of the series. In Game 3, a game the Rockets needed to have and lost by 35, he was only a -15 and dropped a 16-8-4 with 3/5 from deep. He was among the only Rockets who held his own.

And then, he was gone. The Rockets expressed interest in taking him back at roughly $2 million for one year — which would have given him a $7 million salary next year (thanks Stan!) — and Smith's camp was totally quiet. Nothing.

Then the rumors started to surface. The team with the most interest in Smoove was the team whose souls he crushed. We still heard nothing from Smith's camp, until it came out that he was taking a veteran's minimum deal to join the Clippers. Leaving, reportedly, a million dollars from the Rockets on the table. Kind of a slap in the face, no?

Not exactly. A huge part of the reason Smoove played so much for the Rockets were the subsequent injuries to Terrence Jones and Donatas Motiejunas. They will, by all accounts, both be healthy for the upcoming season. Clint Capela will demand more playing time.  If Sam Dekker sees time with the Rockets outside of RGV this season, it would surprise no one if it was as a stretch 4. There aren't 20 minutes a game for Smoove in the rotation next year; there might not be 10.

Josh Smith has been one of my favorite basketball players to watch in the NBA since he had one of history's most underrated dunk contest performances. He started as a small forward and once his body filled out and he became one of the league's pre-eminent shot-blockers, he turned into one of the most versatile power forwards of the last 20 years. The playmaking power forward every GM in the league wants has been in the league for 10 years, he just can't shoot, and his name is Josh Smith.

So thanks for five of the strangest, most significant months any Rocket has ever had Josh Smith. Enjoy your winter in Los Angeles, because I have a feeling the spring of 2014-2015 will be much sunnier in Houston than it will be in L.A.