The Rockets have championship hopes this year. And the year begins today.

1. What Significant Moves were made during the off-season?

The Rockets traded four non-contributors and a first-round pick for Ty Lawson while the point guard was in rehab after a second DUI arrest in seven months. The Nuggets got Pablo Prigioni, Kostas Papanikolaou, Joey Dorsey and Nick Johson, all of whom were waived, save for Johnson. The Rockets got one of the fastest players in the league filling their position of greatest need. MVP candidate James Harden stressed the need for an alternative ball-handler, and he got one of the best in the league with the ball in his hands in Lawson.

The Rockets also picked up two high-value draft picks in Sam Dekker and Montrezl Harrell. Both were expected to go above their 18 and 32 draft slots, and now both are in Houston. With a crowded rotation in the frontcourt already, expect both to spend time in the D-League, barring injury. Harrell could help more right away with rebounding as Donatas Motiejunas recovers from injury. Dekker is a long-term play as a playmaking power-forward who can space the floor.

2. What are the team's biggest strengths?

Star power and depth. Harden, Lawson and Dwight Howard make up a legitimate Big Three, the kind Daryl Morey has coveted for years. While Lawson's legal and personal troubles are serious, he's never experienced a dip in on-court performance, finishing third in the league in assists last year. The Beard was Top 10 in that category, but he might lead the league in points per game — and will certainly reduce his turnover rate — while shooting a higher percentage now that Lawson is here to draw attention.

Beyond the triumvirate above, this team is just insanely deep. Patrick Beverley and Jason Terry are the backup guard, Corey Brewer serves as a capable fill-in at the 2 and 3, Trevor Ariza is an ace defender, and the big men rotation around Howard, Terrence Jones, Motiejunas and Clint Capela, have all proven their worth as NBA rotation guys. The Rockets had one of the best benches in the league last year, which helped them overcome horrific injury luck. Better health this year means their bench could be downright unfair.

3. What are the team's biggest weaknesses?

It's hard to tell at this point, but likely turnovers and rebounding. Turnovers became too much to bear against Golden State in the playoffs, culminating with a 12-turnover head-scratcher by Harden in what ended up as the series finale. And aside from Howard and Capela (who is still raw, despite huge promise), the big men have not proven they are excellent rebounders (Motiejunas especially). But, after watching this team perform last year, these feel more like picking nits than glaring flaws.

4. What are the goals for this team?

The Rockets have championship dreams 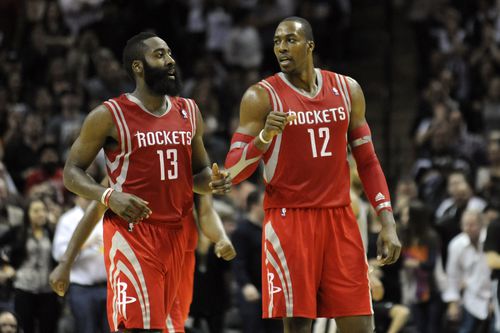 Harden and Howard have made their goals clear

It's championship or bust in Houston. They were three wins away from the NBA Finals last year without their starting point guard and best post scorer. Now they have Ty Lawson, a year more of continuity from everyone else and health for Beverley, Howard and (soon) Motiejunas. For the first time since Hakeem Olajuwon patrolled the paint in Houston, the Rockets are legitimate championship contenders, and will be treated as such from Day 1.

5. How can the Rockets come out of the West?

The West is undeniably brutal, and probably more brutal than last year. But how quickly people forget that the Rockets were the No. 2 seed and a conference finalist last year, and they are a demonstrably better team. Sure, the Spurs appear to be better with LaMarcus Aldridge joining the fray and everyone else returning (save for Tiago Splitter and Cory Joseph). And the Clippers won't be quite as shallow. And Golden State didn't lose anyone (save for David Lee) from their juggernaut championship run. And Kevin Durant and Russell Westbrook are healthy. Oh good lord.

On paper, this Rockets team is as good as anyone else. They were bitten by the injury bug last year. It's not the Houston way for luck to turn around like that (our sports teams have historically stayed on one side of the luck spectrum, it seems), but it's a possibility. Who knows? Stephen Curry used to have glass ankles. Tim Duncan's cyborg motor might be approaching obsolescence and the Clippers might be too emotionally shellshocked to recover and beat the Rockets in a seven-game series. In a race this crazy, anything can happen, and the Rockets are better equipped than just about anyone to come out on top when the dust settles.