The Rockets have a rebounding problem

Tired of all the positivity? Let's get negative with some of the potential problems with the Rockets' championship roster.

Share All sharing options for: The Rockets have a rebounding problem

It's Game 1 of the 2014 playoffs, the Rockets are tenuously holding on to a two-point lead after they were up double-digits at home, but there's only 7 seconds left on the clock, Rockets may just escape with a home win, first of the Harden and Howard era. The whistle blows, Wesley Matthews fakes a screen to Damian Lillard and immediate curls back to the top of the key, receiving the pass en route to a potential game winning 3.

Despite trailing after a slight stumble, James Harden still makes a great contest on the shot. The shot has no chance, but before you even breath a sigh of relief, Damian Lillard gets his hand on the ball and guides toward the rim. The ball ricochets off the rim again, only to find LaMarcus Aldridge's finger tip and finally falls through the net. The arena sat in stunned silence as the Rockets snatch defeat from the jaws of victory.

If you feel like that happens a lot to the Rockets, you may be right.

The reason for last season's drop off is obvious. Dwight Howard missed half of last season and his most competent back up was an undrafted rookie that ended up in a Lakers uniform in the middle of the season(You got us back, LA, you got us). When Dwight Howard was on the floor for Houston last season, the Rockets only gave up 24.8% offensive rebounds to the other team, but without him, Rockets gave up 28%. Dwight Howard no longer monopolizes the leader board on cleaning glasses, but it's clear that he remains a top rebounder in this league with undeniable impact on the Rockets as a whole.

However, as the playoffs would indicate, Dwight Howard is not a cure-all for the Rockets' rebounding woes. With a healthy Dwight Howard performing at a high level, Houston still lost the rebounding battle in more than half of their playoff games last season, by double digits on several occasions. Even more confounding was the fact that they gave up almost 30% offensive rebound percentage to Dallas and Golden State, two teams not exactly known for front court prowess or depth, but limited the Clippers, who had a devastating frontcourt duo, to only 21%.

On the surface, the Rockets do not look like a team that should struggle keeping people off the glass. Beyond the obvious rebounding force that is Dwight Howard, there is athleticism and length throughout the roster, with the exception of maybe point guard (Ed. Note: Although Patrick Beverley is an above-average rebounder at his position. That was missed in the playoffs). Even without Donatas Motiejunas' length in the playoffs last season, one would have expected the Rockets to hold their own with the dynamic athleticism of Terrence Jones, Josh Smith, and Clint Capela supporting Dwight Howard, but it is difficult to hold on to that notion when Draymond Green and Al-Farouq Aminu dominated the offensive glass against the Rockets.

The power forward platoon has been a topic of discussion, but in this particular aspect of the game, both are found wanting. Rebounding has been a weakness for Motiejunas his entire career. Ever since his prospect days, scouts have constantly been knocking his rebounding ability. For perhaps the tallest guy on the team, this is an unfortunate flaw. Last season was his first season playing starter minutes, and he only managed to average 5.9 rebounds per game, and that's mostly without Dwight Howard taking away rebounding opportunities.

Of all the regular Rocket frontcourt players last season, Motiejunas had the lowest defensive rebound percentage at only 16.1 percent. among 85 qualifying players who averages at least 10 rebounding chances per game, he had the 4th lowest ratio of rebounds per chance at only 52%. While his on/off numbers suggest he had a positive impact on team rebounding, the team only grabbed about 73% of available defensive rebound when he's on the floor, which is decidedly below average.

Terrence Jones is a curious case. When Terrence Jones is healthy, he is a nightly double-double threat. When you look at him, a 6'9 athletic forward with a 7'2 wingspan, he looks like a good rebounder. His career rebounding average of 6.5 rebounds a game is underwhelming, but his career defensive rebound percentage of 18% is at the very least average. His 59% rebound per chance ratio from 2013-2014 would also suggest that he's an average rebounder at least. However, for the second season in a row, he had a negative impact on the Rockets' defensive rebounding.

Last season, Rocket grabbed only 70% of the defensive rebound available with him on the floor, compared to 73% without him. One can attribute this to the limited sample sized due to his injuries last year, but the same trend exist the season prior when he was healthy. In 2013-2014, Rockets grabbed 73% of the defensive rebounds when he was on the floor, but 75% when he was off the floor. Rob Mahoney of SI noticed the trend early in Jones' career and wrote about some of the possible reasons, and if the 2015 playoffs were any indication, Terrence Jones has yet to buck that trend.

This leaves the Rockets in an awkward position. They have two power forwards that they will be counting on for significant contribution in the upcoming season. One of them cannot rebound, and the other gives them up to the other team. Both will put the Rockets at a disadvantage at any given night without Dwight Howard keeping the rebound count afloat.

The problem is Dwight Howard as a shot-blocking threat, cannot account for every defensive rebound. Dwight Howard is also not guaranteed to play every game given his recent injury history (plus, he's suspended for the first game). To complicate the matter, Terrence Jones and Donatas Motiejunas together, albeit in limited minutes, has been disastrous for defensive rebounding, giving up 31% offensive rebounds to the opposing team the past two seasons. Their production at their current price point makes them difficult to replace on a team with two max contracts in tow, so the Rockets are essentially stuck with this problem for the season. It is not enough of a disadvantage to hurt the regular season, but in the post season, every slight disadvantage can turn into a fatal flaw.

Clint Capela is ready to break out 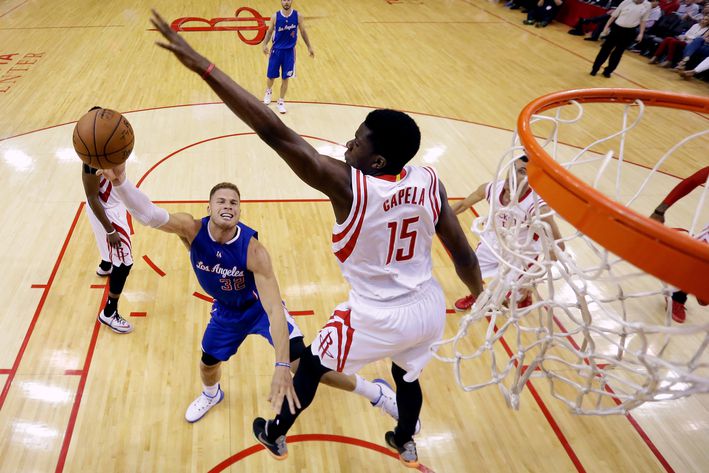 Perhaps a little ray of hope is the development of Clint Capela, who has demonstrated a rare combination of length, athleticism, and fluidity on the NBA floor. In the playoffs last season, he came off the bench and posted an impressive 11 rebounds per 36 in his limited minutes. His 23% defensive rebound rate would put him second on the team if he can maintain it in longer minutes. His presence may allow the Rockets to break up the awkward pairing of Motiejunas and Terrence Jones completely and give them a rebounder to play alongside when Howard rests.

However, it's far from guarantee that he will have a positive impact on the boards given his relative inexperience. In the playoffs, where he received the bulk of his limited minutes alongside Josh Smith, the team only managed to grab 69% of the offensive rebound when he's on the floor, that number dropped even more when paired with Terrence Jones. His almost 10 rebounds a game in the D-league seems impressive until you realize how severely the D-league lacks frontcourt talent. Positioning in the NBA is one of the most difficult things to learn for an inexperienced athlete like Capela, so any hope for Capela to be the solution to this particular problem seems like a long shot at best.

There are no easy solutions for this particular problem. Rockets' open floor style is inherent prone to give up offensive rebounds. As mentioned above, there are no real affordable alternatives to the current platoon next to Dwight Howard. James Harden and Trevor Ariza did an admirable job last season supporting the front court on the glass, but ultimately the battle is in the paint with the big players. There is still a bit of hope for the current players to improve, but to expect significant improvement is probably unlikely. Young players like Clint Capela and Montrezl Harrell may see themselves come into some unexpected minutes if they demonstrate the ability to be an impact rebounder, but that's a lot of expectations on the young players. It may just be something Rockets have to live with this season.

Rebounding is far from the most glaring of the Rockets' weaknesses. It's certainly not as concerning as the team's propensity for turnovers and the utter inability of the frontcourt to capitalize on foul shot opportunities. No team is perfect, yet one wins the big trophy every year. As the team once again fights the uphill battle to establish themselves as legitimate contenders in the treacherous Western Conference, it will be interesting to see how the Rockets deal and overcome these problems, because that's what good teams do.