It's NBA Rookie Week here at SB Nation, where we take a look at the contributions and future of each team's rookies. It's Montrezl Harrell's turn.

The Rockets have a power forward problem. That's no secret. Neither Terrence Jones, Donatas Motiejunas, nor Josh Smith have made much of a difference at the position this season. Clint Capela's played well at times, but he's not your classic four, merely an athletic five moonlighting out of sheer necessity. Things have occasionally gotten so bad, even Trevor Ariza has spent time at power forward, and he's been a career-long three.

Which brings us to the rook.

In a Rockets' season infamous for a lack of intensity, Harrell's been a hard-nosed, energy guy and a breath of fresh air at the position. Sure, his pure numbers haven't been superb. He's averaging just 3.4 points. 1.7 rebounds, 0.3 steals and 0.2 blocks on 64.7 percent shooting in only 9.8 minutes per game.

But extrapolate those out to per 36, and suddenly, Harrell's box looks a lot better. Harrell carries per 36 averages of 12.3 points and 6.8 rebounds to go along with 1.0 steal and 0.8 blocks. While it's certainly nothing eye-popping, that's a solid line for a rookie power forward still very much developing his offensive repertoire and adapting his already-competent defensive skills to the NBA game.

Harrell's been even more noticeable outside the box, however. This year has been notoriously devoid of heart and fire for the Rockets, and Harrell's play has stood out in particularly because of the desire he displays on a night-in and night-out basis.

It's been these types of hustle plays, even in defeat, that's drawn extra eyes towards Harrell's potential moving forward:

That @MONSTATREZZ steal & slam to end the 3rd strong. pic.twitter.com/UXAoOzsOrT

And he also runs the floor exceptionally well:

So why haven't we seen more of Harrell?

Sure, he's played in 33 games for the Rockets this year, but he's also done several stints with Houston's Rio Grande Valley D-League affiliate. Even in the games he has played (and impacted), coach J.B. Bickerstaff hasn't exactly given Harrell an extended audition. Harrell's played above 20 minutes only four times this season.

For starters, Bickerstaff is coaching for his job and likely has felt more comfortable giving extended minutes to veterans, despite some evidence Harrell may actually present his best opportunity to win. On-the-job training is not a concept Bickerstaff is able to afford his players with his own situation so tenuous.

Second, the Rockets needed to find out exactly what they have in Jones and Motiejunas, who are both headed for restricted free agency in the offseason. Jones was given every opportunity early in the year to seize the position, and failed spectacularly to the point where he can now barely see the floor at all. 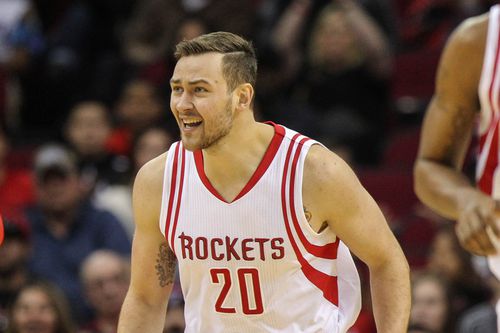 Motiejunas is back in the starting lineup after finally recovering from back surgery and the failed trade attempt to Detroit, though the fact that the Rockets were willing to move him for a draft pick and cash savings says both something about how they feel about the Lithuanian big man and also about the potential of the rook. D-Mo is now officially on a 20-game audition.

In addition, the Rockets' offensive philosophy, which is predicated on opening up space for James Harden to operate, requires a power forward capable of spreading the floor in a consistent capacity. It's one of the reasons why the Dwight Howard-Capela Twin Towers front line sees minimal minutes these days and that the Rockets were so willing to turn to Ariza at the position in time of need.

Harrell, despite showing a smooth jumper and decent range in his college career at Louisville, just hasn't been able to translate that yet into his pro career, as 67.6 percent of his shots come from within 3 feet of the basket. As Harrell's pro experience increases and his offensive skill set diversifies, so should his range, but that improvement will only come with additional playing time, a rare commodity for a young player and something that Harrell has yet to be gifted.

There's a chance none of Jones, Motiejunas and Smith are on the Rockets' roster next season, which could potentially leave the power forward slot wide open for Harrell's taking. In fact, the only one of the veteran trio with any real chance of returning is Donuts, which could be the optimum scenario for the Rockets.

D-Mo's cerebral and skilled game is a perfect foil to Harrell's more rudimentary, yet effective, all-energy attack and would give the Rockets flexibility at the position and a proven commodity in Motiejunas to take the pressure off of giving Harrell too much, too soon.

There are a lot of potential changes coming to Houston next season; who knows who the next coach will be and how he'll feel about the individual pieces in Houston, and a significant roster turnover already seems likely in light of this season's failures.

For now, though, the Rockets have enough faith in Harrell that he's the only power forward guaranteed back in H-town next year, and he's shown enough potential to make us all excited about his future.