Rockets vs. Warriors playoffs recap: They are who we thought they were

Rockets lose by 26 and Steph played 3 minutes in the second half.

Share All sharing options for: Rockets vs. Warriors playoffs recap: They are who we thought they were

I wasn’t expecting much.

I don’t know. Call me a bad fan. Call me realistic. I don’t care. I was expecting the Rockets to lose by about 20, and if they were going to win any game, it’d be Game 4 in an effort to swept in the gentlemanly fashion.

So, when the Rockets put up 15 points in the first quarter, and Stephen Curry put up 16, I wasn’t really surprised. Neither team scored for the first few minutes. The Rockets actually played pretty physical defense. The Warriors just hit shots, as they do. All season, the most consistent complaint of Rockets fans was about effort, and you can’t say the Rockets weren’t trying in this first quarter. Pat Beverley started a fight with Steph 5 minutes in. The effort wasn’t the problem. 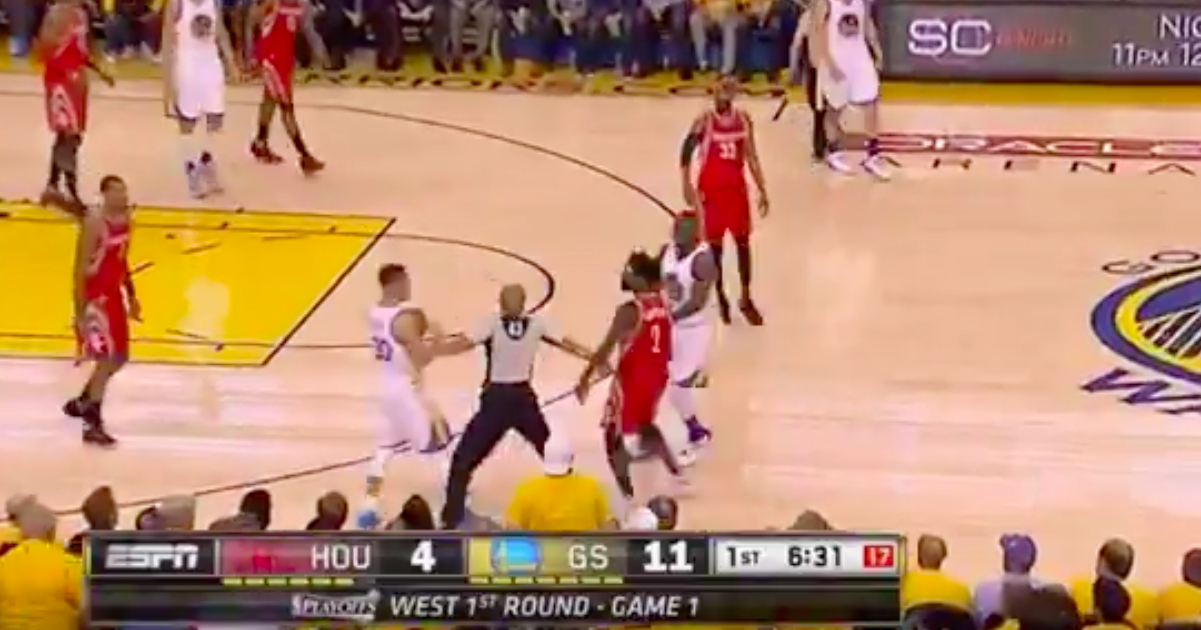 This was the highlight of the game

The shooting, though. That was a problem. Midway through the second quarter, the Rockets were 12-32. James Harden had just 4 points on 2 of 9 shooting, and hadn’t sniffed the free throw line. J.B. Bickerstaff’s lineups didn’t help this either, as Corey Brewer played heavy minutes and we even saw Beasely/Smoove/Capela share the floor all at once. It was confusing, and, clearly, it didn’t work.

When you miss shots like the Rockets did in the first half, the defense (or, defensive effort) will inevitably start to fade away. After a couple of questionable calls, including multiple moving screens on the Rockets, and even more missed shots, the Warriors began to get open look after open look. Curry went to the locker room with a tweaked ankle, but he left with 24 points. Harden went to the bench shortly after with 4 fouls. The Warriors were up 27 at the break.

If I’ve learned anything about the Rockets over the last month, it’s that when KJ McDaniels is in the game, the majority of things that happen are good. He checked in toward the start of the third quarter, for Beverley and not Brewer for some reason, and things swung the Rockets way a little. With him in the game, it’s 4-on-5 on offense. But things just go well when he’s out there. The Rockets cut the lead to 16 with him on the floor, qlthough that was in large part to Harden finding a rhythm and scoring 13 in the quarter.

Look, the Rockets didn’t play well. The Warriors didn’t play great. The Rockets tried their asses off, especially for the first quarter or so. They even got good looks, for the most part. The only logical conclusion I can come to from watching this game is that the Rockets simply aren’t as good as the Golden State Warriors. It’s not complicated, but it’s not wrong.

There were some questionable calls as the game ended. Draymond Green threw D-Mo to the ground. Then D-Mo got called for fighting for a rebound. These things are frustrating and they make for unentertaining basketball, but they don’t buy 27 points if they get the call right. Early in the third, Jeff Van Gundy said something along the lines of "The Rockets should just play. Stop acting frustrated on every single possession," and that’s fair. That said, the Rockets are people, similar to how we, you and me, are people. And we spent the whole damn game being frustrated with the Rockets. It showed, and Houston lost 104-78.

I expected basically this result in Game 1, and I expected to be this frustrated. There is, after all, a lot to be frustrated about. But I’m still watching Game 2, if not just to see if anything changes.