The Rockets have a big decision to make in the off season. Who should be brought in as head coach to try and put the Rockets back on the right path? Let's take a look at some of the candidates.

Share All sharing options for: Breaking down 6 potential candidates for Rockets head coach

Well, here we are. Instead of analyzing the Rockets first round playoff matchup like we all expected to be doing at this point, we are analyzing the candidates Daryl Morey will be choosing from to be the head coach of this dysfunctional Rockets locker room.

This has been one of the most disappointing seasons in Rockets history, and if it wasn't for the Bulls and Wizards producing equally terrible seasons, the Rockets would be even more of a laughing stock throughout the NBA. This offseason, the most important decision the Rockets face isn't whether or not Dwight Howard returns, but rather who is brought in to be the next head coach.

As we have written about over the past week, J.B. Bickerstaff is not the solution, and the Kevin McHale firing was simply a desperate attempt to easily point the blame of the Rockets terrible start on. That brings us to this article. 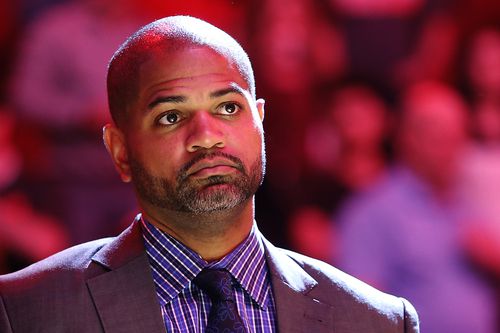 Today, the incredible Kevin Arnovitz of ESPN wrote an article identifying six head coaching candidates to watch this summer. The list is made up of current NBA assistant coaches, and I for one, am still of the impression that coaches make a big difference in sports and can make or break a team's season. Therefore, I figured I would put together another list combining some names from the article and former NBA coaches. Let's do this.

Oh, also, I left out college coaches such as Jay Wright and Tony Bennett, along with Mark Jackson because I don't think the Rockets will be considering them (though I would love to see Wright in Houston next season). Now let's do this:

Thibs is my personal preference to be the next head coach for several reasons. First, Thibodeau is known for his great defensive schemes, as his Bulls consistently were in the top 10 in scoring defense. As an assistant for the Rockets from 2004-2007, Thibodeau led the Rockets to the Top 5 in the league in scoring and field goal percentage defense each year. Throughout his career, Thibodeau has helped his team finish in the top ten in team defense 15 times. Fifteen!

But the Rockets defense has been atrocious this season, and even that sounds like an understatement. Lazy defensive effort (see: Harden, James) along with scheme breakdowns and endless finger pointing are the main reasons the Rockets will most likely be watching the playoffs from home. The Rockets give up 106.6 points per game, good for 27th in the NBA. Thibodeau can come in and improve that right away.

The other reason I would love Thibodeau to be the next head coach is for his no-nonsense personality and style. While Thibodeau has (rightly) been criticized for working his players too hard and too often, the Rockets need a coach who can lead the big personalities of James Harden (and possibly Dwight Howard or any other marquee free agent the Rockets sign). Too often in the past, whether it be Kevin McHale or J.B. Bickerstaff, Harden has gotten away with giving minimal effort on defense without being criticized or punished by the coaches.

I understand the Beard is often the only source of offense for the team, but when he doesn't get called out for such effort by the coaches, it doesn't exactly send the right message to the other players. Thibodeau's style will discipline the Rockets and incentivize them to work harder on defense.

After a year off from coaching, Thibs sounds more than ready to return to the game. His first stop on the comeback tour should be in Houston.

The first (and most intriguing) name from Arnovitz's list is Nate Tibbetts, current assistant coach of the Trail Blazers. Tibbetts has vast coaching experience in the league, as he was a Cavaliers assistant after being the head coach of the Sioux Falls Skyforce and Tulsa 66ers, where he led his teams to playoff births in three of his four years as head coach. As Arnovitz notes: "The Blazers' young backcourt praises him for his ability to communicate" and although he isn't a big personality (while most coaches are), his unique combination of head coaching experience, player development skills, and communication skills surely make him one of the leading candidates to obtain a head coaching position this off season. Why shouldn't he start in Houston?

Another name from Arnovitz's list is Chris Finch, a current assistant for the Rockets and former head coach of the Rio Grande Valley Vipers, where he won the D-League championship in 2009. Finch is known for his offensive prowess, as he believes that "an offensive basketball team needs to be constantly pressuring the defense". Finch's current responsibility for the Rockets is as the architect of the "speedy, bombs-or-bunnies" offense. Also, Finch has coached for a decade in Europe, giving him a diverse, unique background. If the Rockets move on from J.B. Bickerstaff (and they should), they have another very suitable candidate in their own backyard.

Luke Walton's name skyrocketed to the top of numerous head coaching candidate lists after he led the Warriors to a 39-4 start this season, the second-best start in league history. Walton previously was a player development coach in the D-League, and has worked on the Warriors offensive schemes since becoming an assistant coach for them in 2014. Walton is very familiar with the triangle offensive scheme, leading him to be a top candidate for Phil Jackson's New York Knicks. The Lakers also figure to have a head coaching opening, and he'd be tempted to join his former team to coach a talented young core with low pressure.

However, if Walton wants to join a roster with championship talent, the Rockets could be the perfect launching pad for his head coaching career. Not much is known about Walton's abilities as head coach other than his brief run earlier this season, and it is tough to tell how effective a coach he was as the Warriors haven't missed a beat since Steve Kerr took back the reigns. I believe Walton can and will be a good head coach in the future, and if he decides to take a shot this off season at being one, he should seriously consider the Rockets.

Van Gundy is the candidate with the most head coaching experience on this list, and it doesn't hurt that he is very familiar with the Rockets organization, having coached them from 2003 to 2007. Van Gundy enjoyed playoff success with the Knicks from 1995 until 2000, and has the defensive background the Rockets should be looking for in a coach this off season.

There isn't much more to say about Van Gundy, other than if the Rockets want to bring some stability and experience in to the locker room, they should look no further than Van Gundy. The only question is if he will be willing to return to the sidelines instead of commentating. He did say on Adrian Wojnarowski's podcast earlier this season that he still lives most of the year in Houston, and would come back to coaching in the right situation, now that his daughter is off to college.

The final candidate on my list is another former Rockets coach, Jim Boylen. Boylen served as a Rockets assistant coach from 1992 until 2003, so he, too, is familiar with the organization. Boylen is currently the associate head coach for the Bulls and is one of the most respected assistants in the league. As an assistant with the Rockets and Spurs, Boylen has won three NBA championships, and was moderately successful as the head coach of the Utah Utes from 2007 to 2011.

However, Boylen is known to have a short temper and combustible personality, leading him to clash with media and players over the years. Pairing him with a player like James Harden may be an even bigger recipe for disaster in Houston. If the Rockets do their investigating and interviewing and find that Boylen has relaxed, he is easily one of the better basketball minds in the league.

Of course, there are some excellent names I left off, including Dave Fizdale (Heat assistant coach), Kenny Atkinson (Hawks assistant), and Alex Jensen (Jazz assistant). However, I believe the Rockets will and should focus on the candidates on this list for their a) defensive prowess (excluding Walton and Finch) b) experience and c) to bring in stability and a clean slate to the locker room.

Who knows, maybe the Rockets somehow squeeze in to the playoffs and put up a respectable showing against the Warriors. Does that lead Daryl Morey to bring back J.B. Bickerstaff? Most likely, the Rockets miss the playoffs, leading to significant roster turnover (bye Dwight! Hello KD? Bradley Beal? Harrison Barnes? Anyone?) and a new head coach. The Rockets need a clean slate next season and must rid themselves of this disastrous season. That process starts with the hiring of a new head coach.