The Houston Rockets' flirtation with former NBA champion Kenny Smith about being their next head coach is reportedly over. Thank you, Les Alexander and Daryl Morey, for this brief respite from the chaos.

This whole thing has been weird. Smith was an odd choice to begin with. The Rockets are not the 2011 Golden State Warriors hiring Mark Jackson. They are a playoff team with one of the 10 best basketball players in the world and a chance to compete at a high level next year. Hiring an engaging personality with basketball IQ out of the world of broadcasting never made much sense.

We went to the #BringKennyBack rally. It was weird. 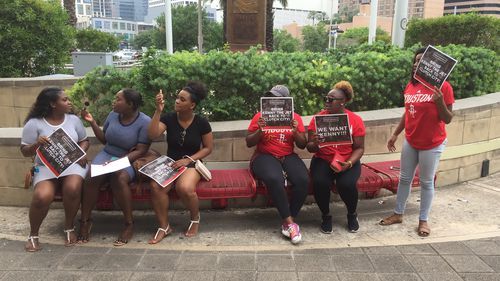 Of course, don't tell that to the 50 or so people who showed up to the Toyota Center with hashtagged signs, DJ Ice and excellent versions of the Running Man Challenge. Kenny Smith has a lot of friends and connections in Houston, was a big part of two championship teams here — the only championships in the city's history, mind you — and has a lot of exposure and name recognition.

Exposure and name recognition do not a great coach make. This report comes on the heels of more rumors that Jeff Van Gundy will be back coaching the Rockets next year. He, Jeff Hornacek, Chris Finch (hopefully) and Frank Vogel seem to be the finalists. I've already discussed why Jeff Van Gundy isn't the right hire. He would certainly be better than Kenny Smith would have been. There's a silver lining to everything.