James Harden is sitting out the Olympics this year. Should Rockets fans be worried?

Do James Harden's offseason activities really have that much of an effect on his in-season performance?

Share All sharing options for: James Harden is sitting out the Olympics this year. Should Rockets fans be worried?

James Harden's camp recently announced that The Beard will not be competing in the summer Olympics games this season. It did come as somewhat of a shock, and Harden himself described the decision as a "painstaking one that I did not take lightly."

The former Team USA co-captain is shunning a chance to further develop his leadership skills and to fine tune his game — not to mention win another gold medal — in advance of one of the more important seasons of his career to this point. What could this do to his and the Rockets prospects for the 2016-2017 season?

The summer of 2014 was the last time we saw James Harden on the Team USA basketball squad. Harden was a key member of the World Cup Championship team and played some inspired ball under head coach Mike Krzyzewski. Team USA ran off a 9-0 record in the tournament, and The Beard made sure to leave an impression on the national stage.

Harden led Team USA with a 14.2 scoring average and also led the squad in steals with 2.1 per game, total free throw made (34) and free throws attempted (42). He was second on the team in assists with 3.2 per game, behind only Cup MVP Kyrie Irving's 3.5, and he shot 53 percent from the field and 42 percent from deep.

Team USA's closest match was a 21-point victory over Turkey in their second game. It was classic domination.

As a result, Harden showed up for the 2014-2015 in-shape from a summer of playing ball, and it showed in the standings. That version of the Rockets jumped out to a 16-4 start from which they wouldn't look back on their way to 56 wins and a trip to the Western Conference Finals. That hot start provided the framework for the entire Houston season.

Consequently, with no summer of 2015 Team USA basketball other than a Las Vegas minicamp, Harden was mostly free to do his thing, a lot of which unfortunately involved more appearances in celebrity rags than in sports ones.

The Rockets then got off to an incredibly slow start in the fall, losing 7 of their first 11, mostly by double-digits, which got head coach Kevin McHale sacked. They also lost 11 of their first 20, an inauspicious start for a team with its eyes on the main prize. The Rockets finished the year 41-41, squeezed into the playoffs with an eighth seed and drew a first-round shellacking at the hands of the Golden State Warriors to end one of the more disappointing years in recent memory.

One of the common theories out there explaining the Houston slow start that derailed this past season was that The Beard came into the year out of shape and out of practice. His failure to dedicate his offseason to improving his game and the lack of any real organized basketball action was said to be a direct cause of the sinking hole the Rockets never could dig themselves out of.

And Harden did look a little rounder to start the season, that's for sure. But was he really out of shape? Was his slow start the reason for the Houston collapse? A closer look at the numbers says that might not actually be the case.

Harden would improve on this stat line as the season dragged on, turning in a near-MVP performance in the best overall Rockets season since the mid '90s.

Now let's take a look at Harden's start in the 2015-2016 season (the 9-11 record) and the one regarded as a failure and possible cause of the Rockets' tough year.

Through the first 20 games, Harden averaged 29.2 points, 6.8 rebounds, 6.7 assists and 1.8 steals. He again shot poorly out of the gates, though this time a little more so, knocking down 40.1 percent from the field and 28.5 percent from beyond the arc. Although he would eventually set the new NBA league record for turnovers, his average of 4.5 through the first 20 games was nearly identical to the previous season.

James Harden and the Cult of Perception 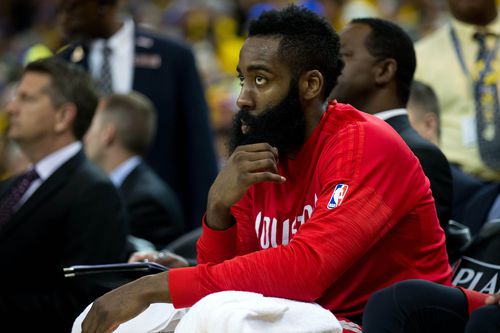 A historic season was unfairly overshadowed by media hype.

Harden started off less efficiently this year, but his counting stats were up. He did improve that efficiency as the season wore on, much as how improved the year prior as well.

Harden did take a step back defensively this season, but team performance also had a lot to do with that slip. And we've already discussed how The Beard's infamous D is far from the enormous black hole the national and social media would have you believe.

The defensive slippage was real, however, as Harden dropped from a slightly above-average defender to a slightly below-average one and this could be where any real effect of offseason basketball is felt. Better shape can equal better defensive effort. It remains to be seen, however, if Harden's career-best defensive year in 2014-2015 was actually a result of that additional work or whether it was simply an outlier and he's now regressing back to his personal mean.

It appears, then, that Harden's physical shape wasn't as big a culprit as it initially seemed in regards to the Rockets' ugly start. The stats say that whether it's an offseason FIBA World Cup run or offseason Kardashian fun time, The Beard simply needs time to find his shot.

It also lends credence to the theory that Harden's 2015-2016 year is criminally underrated and also to the school of thought that perception, rather than reality, kept the Beard off of any All-NBA team this year.

And while playing a summer of ball surrounded by the Association's and the world's best wouldn't exactly hurt Harden (and the Rockets), it doesn't appear to have helped him much either. Sure, there was a huge difference between the Rockets' starts over the last two season (and their finishes), but the season we'd like to forget owes more for its result to Dwight Howard's sulking, Ty Lawson's stinking, and Trevor Ariza, Corey Brewer, Terrence Jones and Donatas Motiejunas regressing than it does to James Harden's offseason activities.

I'd love to see him in the Summer Games. But the Rockets are likely no worse for the wear either way.