Dwight Howard has reportedly opted out, to the relief of Rockets fans everywhere

We have woken up from the Dwightmare

Share All sharing options for: Dwight Howard has reportedly opted out, to the relief of Rockets fans everywhere

The $23.2 million question that has been lingering over the Rockets since the abyss of last season truly took hold has been answered: Dwight Howard will opt out of his contract and become a free agent this summer, according to Shams Charania.

Dwight was a the no-doubt best center in the league when he signed a mammoth, four-year contract with the Rockets three years ago. Since then, he has performed admirably in stretches — particularly in the playoffs — but has failed to live up to said contract and has been a constant distraction on and off the court.

The Rockets are now free from the shadow of this decision, which he had maintained in his last public appearances that he had not yet made. Shams reports that Howard told the Rockets front office he was opting out today. That means the Rockets could have upwards of $40 million of cap space this summer, and now a whole hell of a lot more roster flexibility.

In Daryl Morey’s interview with The No. 2 Place On The Internet For Rockets News Yahoo! Sports’ The Vertical’s Adrian Wojnarowski a few weeks back, the Rockets GM left the door open for re-signing Dwight as a free agent this summer. My guess is that was posturing to protect whatever illusion Morey still upheld that Dwight Howard and James Harden could form the pillars of a championship team. It’s probably a certainty that Dwight has played his last game in Houston. 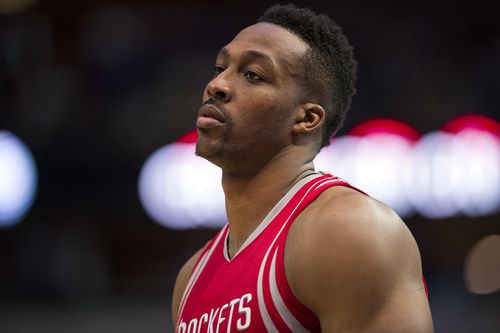 The big question has been answered, but that leaves many slightly smaller ones, namely: who will be the Rockets’ starting center next year? Clint Capela could surely do it fairly well, but his free throw shooting is so bad, his penchant for fouling in high volumes so frustrating, that he can’t be relied on for your standard 36-minute starter’s role. Al Horford is reportedly the Rockets’ chief free agent priority, and it’d sure be swell if the biggest problem the Rockets had at center next year was figuring out who gets to wear 15 between Horford and the Swiss Roll.

There are other free agent options at the pivot, including Hassan Whiteside, who brings his own set of baggage. Donatas Motiejunas started at the 5 when Dwight was hurt last year, and he’s a restricted free agent. There’s also the NBA Draft on Thursday. Lots can happen.

We’ll have more on Dwight’s tenure with the Rockets in the coming days, but I’ll say this much: he was heralded as the next in Rockets’ unparalleled lineage of big men. The stories all read something like this: Elvin Hayes, Moses Malone, Ralph Sampson, Hakeem Olajuwon, Yao Ming, Dikembe Mutombo (only half-joking) and Dwight Howard. He was billed as next in line. He was underrated nationally for all of his time here because of his personality and his past. But he didn’t live up to the billing, and he overstayed his welcome.