And there's still no rumbling of what type of deal he can sign.

We've reached the NBA dead season, where almost every free agent has been signed, Summer League and the Draft have passed, the Olympics haven't started yet — not that any Rockets are on the squad — and most basketball writers are on vacation.

And here Donatas Motiejunas sits, still contract-less, still waiting on what's next. Now that Moe Harkless has re-signed with the Blazers, he's the only restricted free agent left in the league (shoutout to Bobby in the comments for pointing that out). 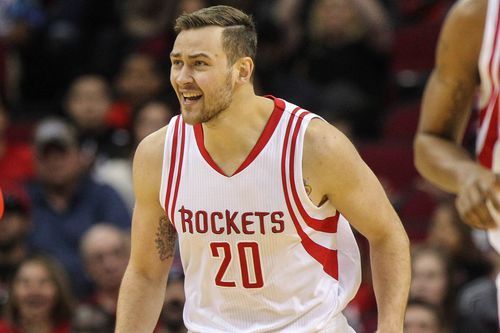 Josh Reese tries to pin down what kind of contract D-Mo could sign.

Donuts says he's healthy, and he won't get to rep Lithuania in Rio because he doesn't want to jeopardize his next contract. According to Ghostface Ziller, he's the second-best free agent left on the board, behind only J.R. Smith. Rockets fans don't need a reminder on what he can bring to a team when fully healthy: elite low-post offense and passing, solid outside shooting, with below-average pick-and-roll defense and rebounding, but above-average rim protection.

If there are other fanbases reading this, trying to get a feel for if their team will sign Donuts to an offer sheet (lookin' at you, Nets fans), you would be lucky to have him. Which is why you probably won't.

The Rockets want to bring him back, reportedly, and can match any offer for him. Restricted free agency can drag out a looooong time: Tristan Thompson signed after training camp had already began last year. Eric Bledsoe's free agency lasted almost as long the year before.

Rich Paul doesn't represent D-Mo, so I doubt a protracted negotiation is what we're going to see here. And this was, let's be honest, expected. Terrence Jones was much more of a known quantity than D-Mo, and he signed for just over the minimum in New Orleans. Teams know Jones is injury prone and inconsistent, but talented and historically productive for stretches.

Although he's been with the Rockets four years, we've only really seen one good season from Donuts. But it was better than anything Jones has ever done. Adding to the mystery is the canceled trade to Detroit, which I'm sure created a lot of red flags, and, as I said on the TDS podcast at the time, absolutely killed Donuts' free agent value.

So here we wait. It's the dead season, and nothing else is going on. 80/20 Donuts returns, but the Rockets' biggest mystery entering the offseason has only grown in intrigue. Let's get it done soon, please.