Rockets Blasts from the Past: Why Royce White is beautiful and matters

Share All sharing options for: Rockets Blasts from the Past: Why Royce White is beautiful and matters

Royce White is such an obscure Rocket.

HOW OBSCURE IS HE???

Royce White is such an obscure Rocket that he never even played in a regular season game for the Rockets.

He was drafted by the Rockets in 2012, the same year the Rockets took Jeremy Lamb and Terrence Jones in the first round. I was still in high school when Houston made these picks, which is to say that I was even more naive than I am now. I watched Jeremy Lamb in the Vegas Summer League and thought he was the real deal. I though people were sleeping on Terrence Jones (and for a minute I was right). But I loved that we even thought to pick Royce White out of Iowa State.

College Royce White was so good because not only was he usually the biggest guy on the floor, but he was also usually the best ball-handler and passer. There were times where he looked like a young Charles Barkley (which I swear is a good thing and nothing like the current TNT Charles Barkley). That kind of build with that kind of skill set is so rare, but there is a reason he dropped to the 16th pick. In fact, a lot of smart people expected him to drop farther.

Rockets Blasts from the Past: Chucky Brown 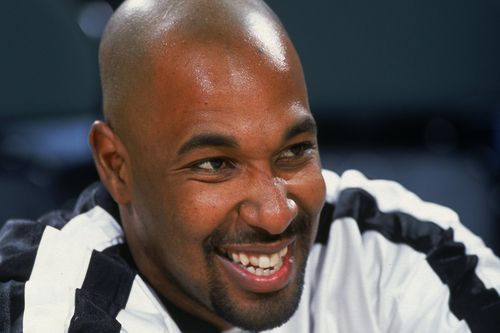 An unheralded Rocket key to the mid-'90s title runs.

Royce White suffers from obsessive compulsive disorder and anxiety disorder, and this meant that he had trouble with flying and with other triggers. After some turmoil, and frankly some mishandling by the Rockets’ front office, Royce’s NBA career began to fade away before it could ever take shape.

It is now that I’d like to remind you that Royce White is was a good basketball player.

All I hear you telling me is that this is a Summer League game.

Look, here’s the thing: athletes, just like everyone else, suffer from mental illness, and it is important that we as fans, and as just people in general, treat that illness with the respect and care that it deserves. If Royce had a bad shoulder, we would be shocked if the team didn’t help take care of that. Those of us who experienced shoulder problems would probably even be pissed off.

I think Royce White is important, but I’m the type of person who appreciates the emotional athlete, or the athlete who makes us think outside of the sport. I love thinking about Allen Iverson’s delayed effect on Russell Westbrook’s wardrobe. I love Muhammad Ali making America deal with race and religion. Royce White hasn’t had nearly that same effect on the landscape of how the NBA and professional sports thinks about mental health, but I would argue it’s only because he’s just some damned obscure Houston Rocket.